If you’re not down for a long-winded race recap, here’s the short version: it wasn’t the race I wanted, but it was still a good time!

We arrived in Atlantic City the Saturday before the race and checked into Bally’s, where the expo was held and the race started/ended. I’m lucky enough to get a room at that hotel each year because my mother also happens to be the penny slot queen and scores free rooms (thanks, Mom)! So once we dropped off our luggage we made our way to the expo where I picked up my bib and won a $2 Dunkin Donuts gift card. Woot! 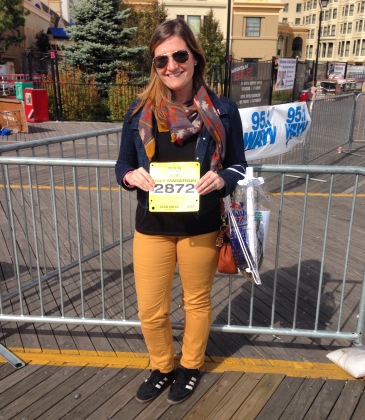 My feet and calves were still aching from my last few runs around town, so after grabbing a big-ass salad for lunch and rolling my muscles out in the hotel room, we headed to the pool and hot tub where we relaxed for a few hours.

After my standard pre-race baked chicken parm dinner we headed back to the room for an early bedtime but I ended up getting quite possibly the WORST night’s sleep ever. My nerves were inexplicably all over the place so I wasn’t able to fall asleep until 11, and even then it wasn’t a very deep sleep. And at 1AM the folks in the next room decided to come back from the casino YELLING. I could hear every. single. word. Like they were in our bed! I don’t know why I didn’t get up and pound on their door – I was half asleep and didn’t want to wake up fully, I guess? While I eventually drifted back to sleep, their spotty conversations worked their way into my weird-ass dreams. I finally woke up a half hour before my 6AM alarm, bleary eyed and exhausted – NOT the best way to start my race day! 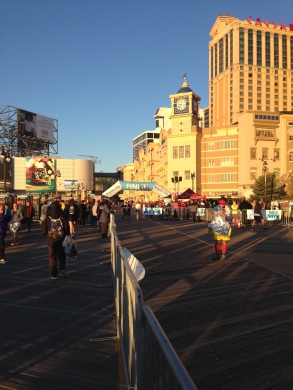 But the show must go on! So I dressed and choked down breakfast, had a half cup of coffee, and we headed down to the boardwalk. Our room was in the perfect spot – I was able to see the start from our window and ease my nerves about the over or under-dressing. The temperature dropped sharply the day before the race, bringing frost warnings and a whole other level of stress to this destination race: fluctuating temps meant I had to pack everything to make sure I got my race day outfit right!

We hung out in the start area and soaked in the atmosphere – it’s always fun to run on the boardwalk, especially in AC. I warmed up relatively quickly so I handed my pre-race jacket to hubby, got my good luck kiss, and entered the chute (where I ran into my Insta-friend who also happens to live in the same town as me, Casey! Girlfriend was running her first FULL marathon that day and she ROCKED it) – and in a few minutes we were off!

The first 1-5 miles were fantastic. What running should always be! Easy leg turnover, awesome crowd around me, cool weather, everything was perfect. I cruised along at a comfortable pace (albeit about :30-1:00 faster per mile than I hoped to finish at), but I felt so damn GOOD that I couldn’t help but go a little faster. Besides, I thought – once I start hurting around mile 11, these faster miles will give me some insurance to stay on target for a 2:49 PR. 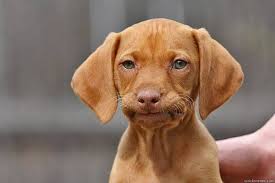 Oh how wrong I was. But more on that later.

The coolest thing about this race is actually something I didn’t know until later. Around mile 2-3, I happened upon a gentleman who looked awfully familiar. Like, I had to do a triple take as he kept perfect pace with me, running ahead for a minute or so, then walking and allowing me to catch up with him. Run, walk, run, walk, repeat.

At this point you probably already know who he is, but I’m going to be 100% honest: I had no idea. I mean, I thought he looked like him. But what the hell would he be doing at the back of the pack of the Atlantic City Marathon? Well, it turns out he was doing what he does best back there: Being Jeff Galloway.

Yes, Jeff Galloway paced me for like 4 miles of the Atlantic City Half Marathon and I had no idea. Not until someone posted on IG that they had spotted him running at like mile 10 did I realize – holy crap, that WAS HIM! I caught up to him as we exited the tunnel and kept up with him all the way out to the marina until mile 5 when I stopped for a gel, swapped out my ear warmers for my headband and pinned my gloves to my race belt. Silly Jess.

After my first gel at mile 5 (around 1:02ish), I felt great! We took off back into the sun for miles 6-8 and that’s where the wind joined the party. This happened last year too – I specifically remember Alain’s choice words at this point – and it sucked the life out of me. I walked to fight through, appreciated the awesome support at the water station at the King Neptune statue, and told myself to hold it together until the boardwalk. Everything will be easier on the boards!

Yeah, no. It’s like a switch was flipped. As mile 8 passed at 14:25 due to my walk breaks (UGH) my body felt like it was made of glass. Everything hurt. I must have gone out too fast, even though I’d felt so great! I passed the mile 9 sign and watched my average pace slowly creep up. 13:15, 13:30…. my confidence from miles 1-5 was a distant memory.

As I met Mike at around mile 10 for my bottle of Cocogo, I came to a full stop and told him my PR was shot. It wasn’t a soul-crusher, but MEH. He encouraged me to just have a good time and take it slow where I needed. After a minute or so of stretching and chatting I took off again and felt moderately better. While it was kind of crushing to know I wouldn’t PR, that meant that I could just go for it and enjoy the run. So I did.

The Gorillaz came on my ipod and I fell into a good cadence to the beat of Clint Eastwood, plodding along the boards like the Clydesdale I am. But at Mile 11.5 I noticed that my average time had gone from “shot to hell” to “hmm”. If I pushed super hard, maybe… JUST MAYBE… could I finish under the 12:57 I’d need to PR? I didn’t think twice, just scrolled to my power song playlist, cranked up the volume, and sprinted.

I cranked along at around 9:30 for most of that first mile and grimaced like a fool the whole time. People on the boardwalk cheered as I blew by them, the finish line in my sights. At 12.5ish, I thought I might puke. But my average mile time was going down! So I kept pushing, even harder. That last quarter mile was uuuhhhg-ly. Finally I entered the chute and smiled as the folks on the sidelines yelled and rang their cowbells. Screw it, I thought – PR or no PR, I ran a great race! 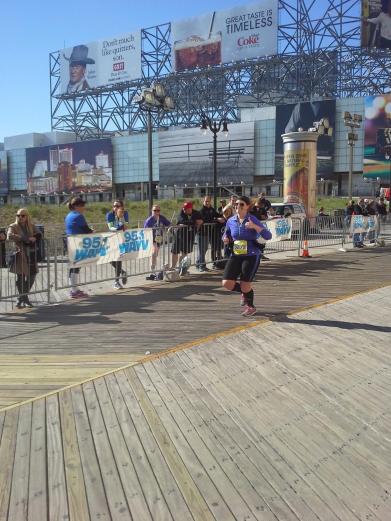 Thumbs up to Mike at the finish!

After crossing the finish and grabbing my medal, I won’t lie – I almost dropped. My legs were shaking like leaves from the effort of that last 1.5 mile, so I made a beeline for the medical tent where I spotted a few folding chairs. After plopping into one and coughing for a good 10 minutes while trying to catch my breath (and texting Mike that I was OK), I finally got my legs back under me and headed for the exit to meet him at the entrance to the finisher’s party.

Overall it was a good race, not great. Honestly, I may skip it next year in favor of another more exciting race. After 3 years of running this one, the crowds have gotten smaller, the course support’s dwindled (seriously, I got more applause from the police stopping traffic). It might be time for me to move on to greener pastures. Racing season in the northeast is FULL of great opportunities and I feel like by aiming for this one I might be missing out. Hell, the Runners World Festival is around the same time and it’s practically in my backyard! I’d love to go and experience all the awesome stuff they have around those races. And who knows: maybe a change of scenery is what I need to break that PR?

All I know is I can’t wait to run my next race!