I love Instagram – it’s the first platform I discovered when breaking into the fitness community, and it’s by far where I’m most active. So when Angela over at Happy Fit Mama posted a Behind the Scenes Look at her Insta feed, I was so excited to jump on the bandwagon!

But where Angela’s list is filled with beautiful, artsy shots with insightful backstories that involve cute details like her donut-crazy son, a long scroll through my photos made me realize that most of my stories center around the funny looks I get when taking my ridiculous mid-run selfies or the silly things I had to do to get the right lighting for a shot. So, in true Jess fashion, I give you my own (slightly twisted) take on a Peek Behind the Instagram Curtain:

After our umpteenth snowstorm this past February, I tried to embrace the “fun” part of winter and make snow angels with hubby. Little did I know that the snowdrift in our yard was about 3 inches of powder on top of hard packed ice and snow that I could stand on. I flopped backwards onto it and slammed into the ground, knocking the wind out of my lungs and snapping my head back. After catching my breath, I spent the rest of that day immobilized on the couch with a massive headache and slight nausea, undoubtedly due to the minor concussion I probably gave myself. But the photo is cute!

While cleaning out my closets last spring I discovered a wealth of running shoes and wanted to show them off. But it was getting late and the lighting in my house just wasn’t giving me the results I wanted, so I decided to take my babies outside! After trying and failing to balance all 5 pairs in my arms, I found that stacking them all on the lid to a nearby storage bin worked marginally better. Do you know just how ridiculous someone looks trying to simultaneously carry a plastic tray filled with smelly old sneakers and an iPhone through the house, out the front door, and across the yard? Very. And do you know how many times shoes fell off the pile and caused me to stop, re-stack, and start again? Four. 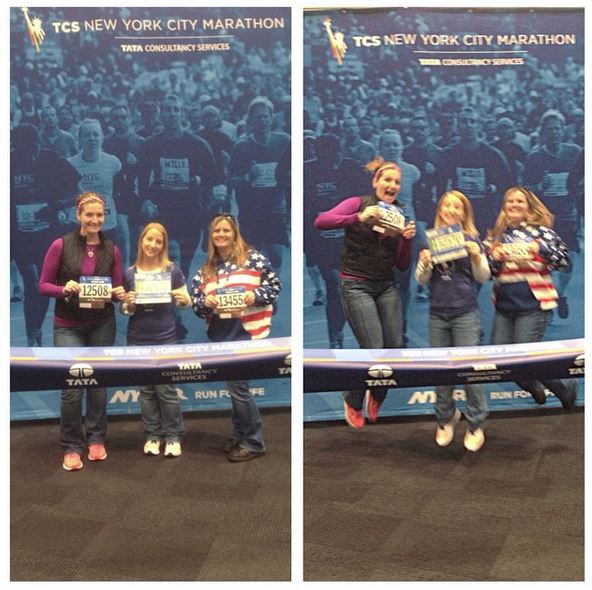 If you’ve ever tried to get a shot of yourself or a group of people jumping, you don’t need me to tell you that they take MUCH more effort than they’re really worth. Unless you’ve got perfect timing (or a photographer with unlimited patience), you’re pretty much guaranteed to never get it 100% right. Case in point: the still-not-perfect shot you see on the right up there legitimately took about 6 tries where we’d all line up, jump, the poor volunteer girl at the NYCM Expo would snap a bunch of pics, and we’d check them out only to go “One more time!”. It’s a miracle any of us had enough leg strength to run the Dash to the Finish Line 5K or the marathon the next day. 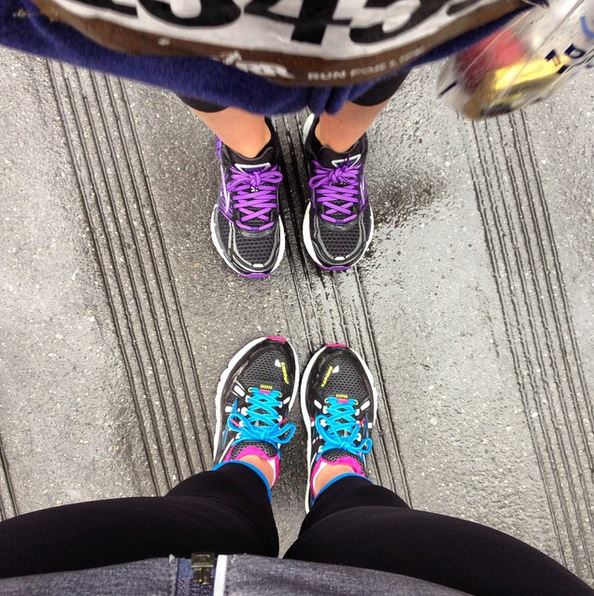 Sure it looks like a cute shot where two girlfriends stood together for a fun shoe selfie after a race. But in reality, I was closer to being murdered than I knew. See, my cousin and I were shivering like we’d been dunked in the Arctic Ocean after finishing a rainy 5K and had to walk clear across Manhattan to get back to the train station. When I say we were cold, I don’t think words can accurately describe just hot COLD it was. And when I insisted we stop to take a fun picture like this? Let’s just say I’m lucky she didn’t whang me in the head with her purse and leave me in a puddle on the side of 7th Avenue. 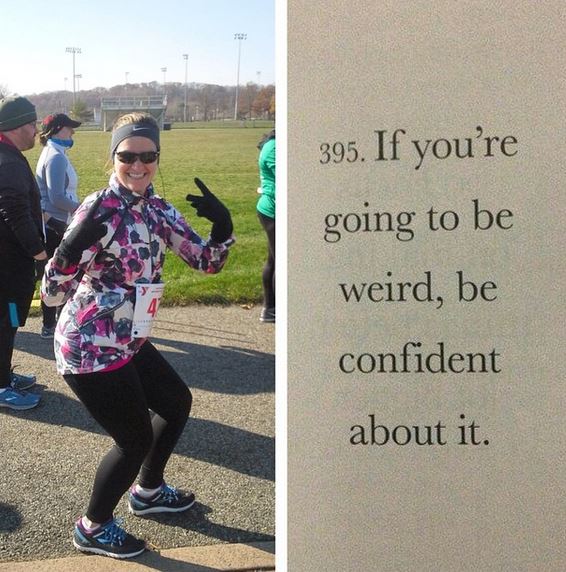 Before each race, hubby has a habit of hanging out with me at the back of the pack where I start, and will take pics as we wait. In this pic, we were goofing off for a minute or two, and I figured I’d have a bunch of time to do the whole lace-tying, watch-starting pre-race thing. But I wasn’t paying attention. We showed up late, and while we were goofing off at the back, they were making the start announcements at the front; this pic was snapped exactly as the gun went off, and I almost got trampled. I spent the first half mile with an unlaced left shoe, waiting for my Garmin to find a satellite. That’s what I get for being a weirdo.

So there you have it – a slightly wonky look at what really goes on behind the Instagram scenes. And this is just the tip of the iceberg; there are similar stories for about 80% of my photos, because I’m basically the worst. If you’d like to see them, head over to my IG feed and give me a follow – I promise to keep it just as weird and entertaining as I have here!

What about you – what goes on behind the curtain of your IG feed?

There was an error retrieving images from Instagram. An attempt will be remade in a few minutes.