After a relaxing pre-race day in Florida, my alarm went off at 2:35 and I poured myself into my snazzy homemade Captain Phasma outfit for the Star Wars Dark Side 10K! PS – a HUGE thank you to Tiffanie (aka Star_Wars_Runnah) who made my skirt and tank BY HAND to thank me for donating to her NYC Marathon March of Dimes fundraising efforts! She’s one of the only other runners out there who loves Star Wars as much as I do, and I pretty much fell in big-puffy-hearts-on-your-Trapper-Keeper-LUV with her after meeting her in Disneyland during the Light Side Challenge. Go give her a follow on IG.

If there was one good thing about getting to Florida a few days early, it was being able to acclimate myself to the heat and humidity. Seriously, it was brutal. Like, in the 90’s with 86%+ humidity every day we were there. But arriving a few days early gave me a chance to get used to it and hydrate extra, which paid off in the end.

So I hopped on the easy-peasy lemon-squeezy bus to the start area right outside my hotel and before I knew it, we were at the Magic Kingdom parking lot start staging area! 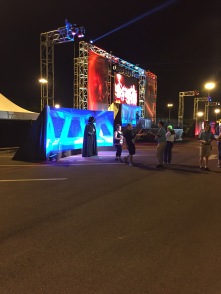 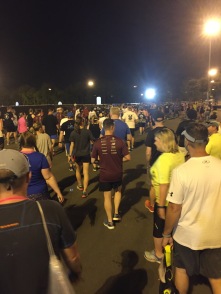 I SPY A MATT THE RADAR TECHNICIAN!

The coolest thing I discovered about the WDW races (when compared to the Disneyland races in Anaheim) is that they set up character photo ops at the start and finish areas to guarantee that you get a pic with whoever your little heart desires without having to worry about missing them on the course (or being swept from the course if you waste too much time waiting)! They had Phasma, Kylo Ren, Darth Vader, Jabba, Boba Fett, and BB8! So what’s a girl who arrived way early to the start to do? Go make some friends in low places:

I almost stole Salacious Crumb but the running from the cops would have added extra miles to my legs before 19.3, which seemed kind of pointless.

After heading into Corral C and waiting for what felt like a LOT longer than I waited during the Light Side Challenge (probably because I was alone this time), we were finally at the starting line!

Once the gun went off just after 5:30AM, we took off in the dark through the Magic Kingdom parking lot and out the gate that folks drive through, which was fun:

The one downside to the WDW races (compared to Disneyland) is the time spent off Disney property. The run down the highway to get to the first park was a loooooong one. Especially when it’s dark and about 90% humidity and you’ve got a cape that doesn’t breathe (but absorbs your sweat quite nicely) flapping round your ass the whole time. 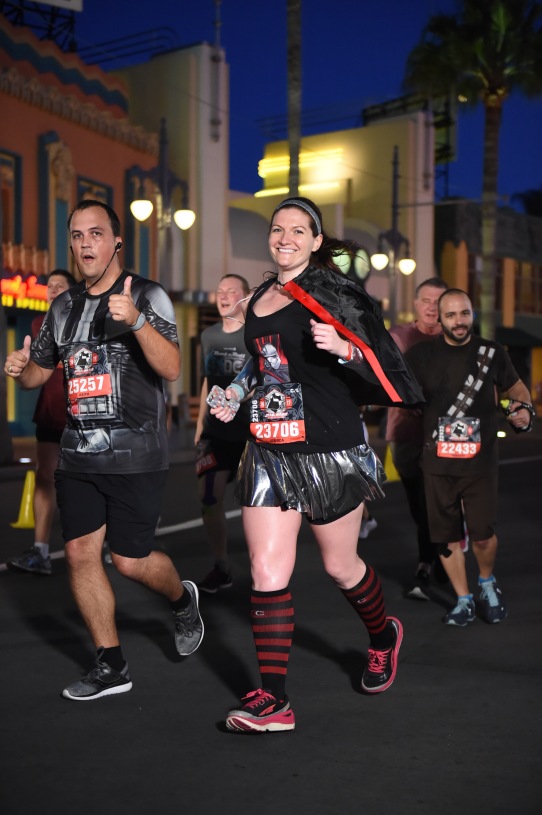 They DO kill it on the pro photos though, especially in the parks! 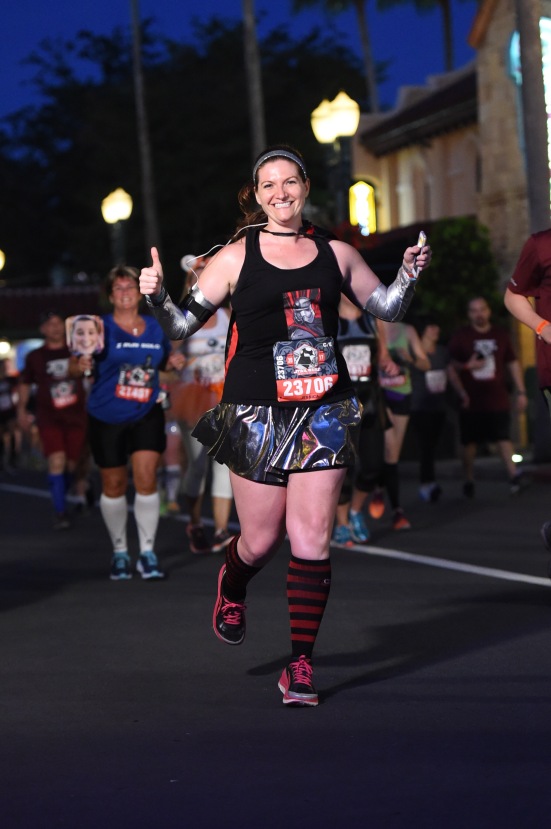 This is a funny shot I had to share: apparently, social media is now a part of my very DNA, as evidenced by this pro shot after I stopped to snap some on-course pics:

And while I kept an eye out for the character stops at each mile, no one really jumped out at me as a must have. Darth Maul and R2-D2 were there I think, but I was just kind of hot and wanted the whole thing to be over with, really. The last 3 or so miles as the sun came up were quite lovely, though! 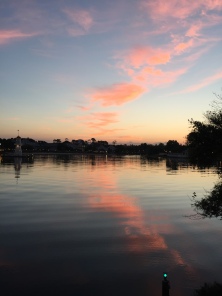 And for all the miles of non-character filled highway we had to run, I will say that Disney made up for it BY PUTTING HUX ON THE MILE 5 MARKER.  YOU GUYS, HUX. GENERAL BITCHFACE HIMSELF. I died.

He’s one of my favorite characters in the new trilogy. He continually looks like he’s watching someone NOT use a coaster on his new Ikea coffee table, and it’s killing him. I love his sassy ginger resting bitch face and cannot wait to see him return in Episode VIII.

They also had some non-Disney sanctioned folks (aka the 501st legion!) IN the parks, which was cool! 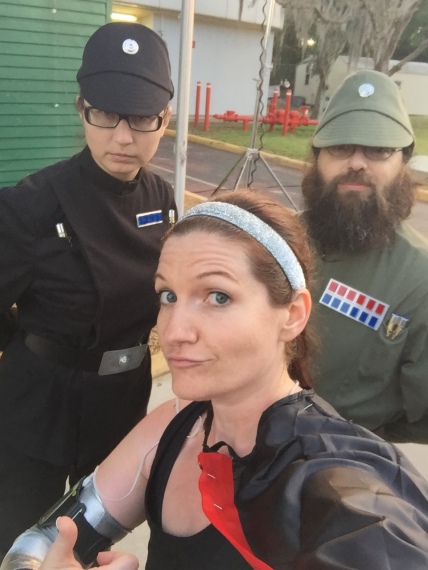 Another fun part about the Dark Side race (and dressing up as a Dark Side character): is getting to play a BAD GUY! I had SO much fun sassing the Stormtroopers – and they got into it too, saluting me and giving Phasma the respect she deserves (yaaasss QUEEEEN).

Right before we finished, the last character stop that I made was for Chewy, because how can you NOT stop for Chewy?

Here’s another fun pro pic. Of course I had to do airplane arms because I’m a child and can’t think of anything better to do in front of a race photographer: 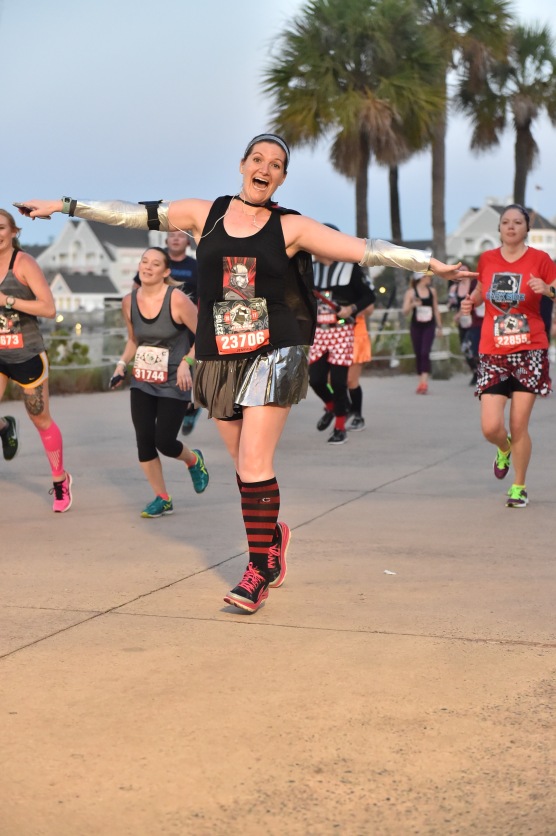 Here you can also see how poorly my $4 silver gloves handled the Florida heat and humidity. They served their purpose.

Finally I entered Epcot, the final half mile in view of Spaceship Earth, and crossed the finish line with smiles and thanking the lord this running sauna was over with.

The medal was so cool: a badass Stormtrooper with a red ribbon that matched my pedicure of all things!

While I was glad the race was over, I was even more excited: now I got to wait for more character photo ops that I didn’t get before the race or on the course!! 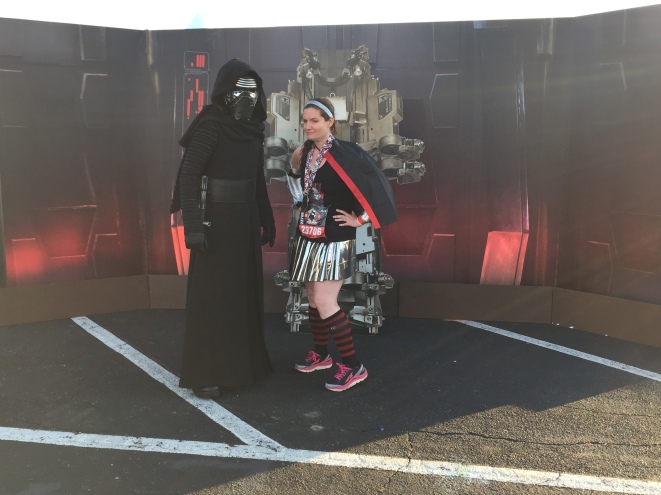 Although I cannot, for the life of me, seem to NOT be awkward around Kylo Ren. I turn into teenage me, acting all weird around the hot guy and forgetting how to form sentences or look at the camera for a photo.

We did get to do the Force choke thing. heheh. Which was fun.

Finally, I jumped in line for a photo with my namesake and LOVED it. I wanted to hug her like Mickey Mouse, but I’m pretty sure she wouldn’t have liked that.

Fun Fact: Alex, who I met at the Disneyland races, also went for the Kessel Run Challenge and ran these races too. He snapped a pic with Phasma and posted this to Twitter:

Thank you for making me giggle-snort, Alex!!

Once I had my fill of character photos I headed back to the hotel on the bus and showered for a day of fun with mama and friends at Disney Springs. 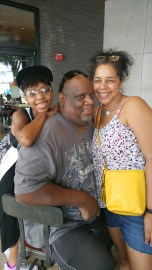 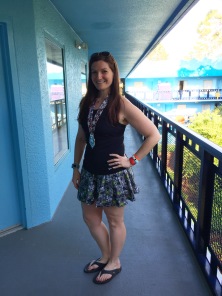 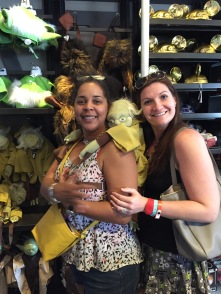 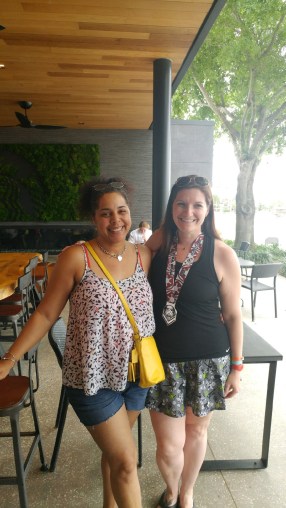 I also made it to the WeRunSocial meetup as well, where I got to hang out with folks I’ve only ever seen online – so fun to make “real world” friends! 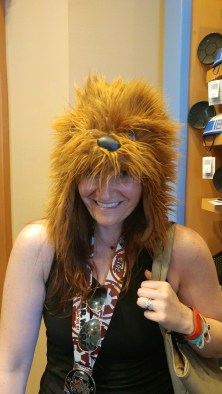 Overall we kept it low-key (to spare my legs before 13.1 the next day) and had a great time before heading back early for another 8PM bedtime and 2:30 wakeup for the next day’s half marathon!