This is the first time since before my injury that I’m really sticking to a solid training plan, and I can totally feel a difference in everything I do. My endurance is better, 4 miles is pretty much nothing, and even though I lost two total weeks of training due to illness, I’m feeling confident and strong!

For a hot minute there though, I did feel a little bit of the training burnout I’ve experienced while prepping for previous races. You know it well, I’m sure: the existential dread you get when you’re staring down another 4 mile tempo run on the treadmill after 3 straight 10+ hour work days and the sun has already been down for 2 hours and the temperature hasn’t cracked over 20 degrees in a week? Yeah, that feeling.

BUT – this time around I’ve got some tricks up my sleeve to help me battle the burnout beast:

That little ditty right there is pretty much single-handedly responsible for getting me through my 8 miler this past Sunday, thank you very much.

I don’t know about you, but there’s just something about some new tunes that puts some pep in my step and makes me look forward to yet another day of running when I feel like that’s all I’ve been doing for years.

While my training plan calls for three days of workouts from Tuesday-Thursday, it created a fun new thing that I like to call “Anything Can Happen Wednesday”. Because it’s cross-training day, I’ve used these non-running breaks as a perfect opportunity to go all out and feel the burn in other ways. To break up the monotony I’ve biked, done hot yoga, and even started a personal challenge to get to the pool more often too. Did someone say Sprint Triathlon this May? 😉

While it’s nice to do other things, the downside of seriously training for a race means that the majority of my workouts involve running, running, and more running. So to keep things interesting, I set little challenges for myself – sometimes even in the middle of a run! For example: last week, when I finally returned to running after being sick for more than a week, I told myself to take it easy with 2-3 miles of light jogging at the most. Well I ended up feeling much better than planned, and cranked out 4 miles at my pre-illness pace basically without even breaking a sweat. 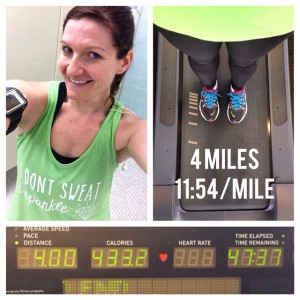 …or breaking a “sparkle”, I guess.

So what did I decide to do the following run two days later? Beat that time, of course! I picked up my pace at mile 3, pushed harder than I would have normally, and kicked the previous me’s ass!

Listen: I’m all about eating to run, and running to eat. Imma be real, there ain’t NOTHING like a slice of peanut butter silk pie after a week of hard training. But while I do like to indulge every now and then, I know that those treats are special because they’re so few and far between. And to balance things out, I experiment in the kitchen with things that make my tummy happy and keep my training on track. Case in point: roasted Brussels sprouts: 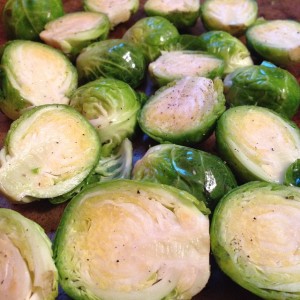 ::pauses to lick the screen::

Yes, these were pre-roasting, but damn were they tasty when they came out of the oven 30 minutes later. Finding new ways to make healthy choices makes it a whole lot easier when I do decide to indulge – because let me tell you, those sprouts were definitely healthy, but they were DEEE-licious!

Those are just a few ways I like to shake things up and break out of the training monotony, but how about you? Any go-to’s to keep the crazies at bay? Favorite new running tunes? Share in the comments!

7 thoughts on “How to Beat Training Burnout”