Just like we’ve done in years past, my good friend Kevin and I hopped on the 5:37AM train into midtown for the FRNY/NYRR Pride Run 5 Miler and let me say before I go any further: I was SO unprepared. 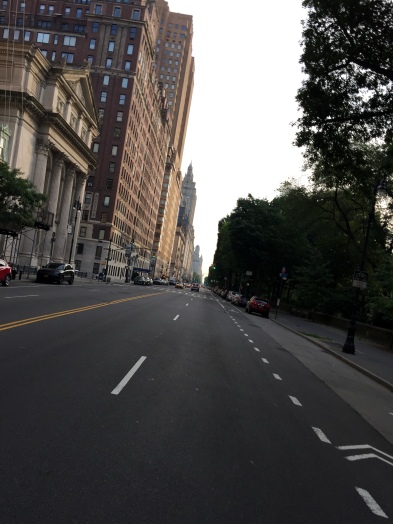 Not unprepared in terms of forgetting sneakers or gels… I mean I had been in physical therapy since May for an Achilles issue and nerve problems that make my leg give out on me, and I’d only run about 4 miles in the lead up to this race. 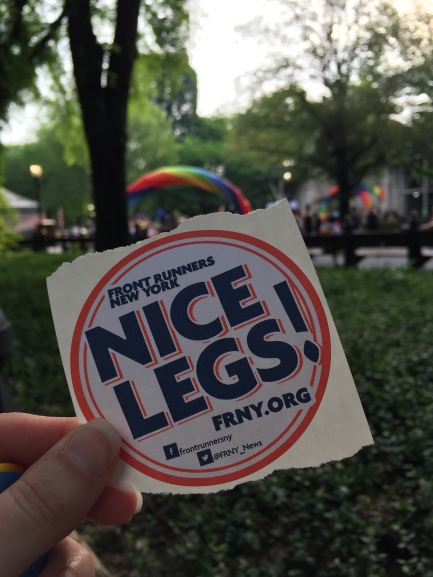 Per my therapist’s orders, this was going to be a fun run (no sh*t), and it was also going to be my first run in the heat, which made for a pretty miserable time once I hit mile 2.5-3. BUT ANYWAY… 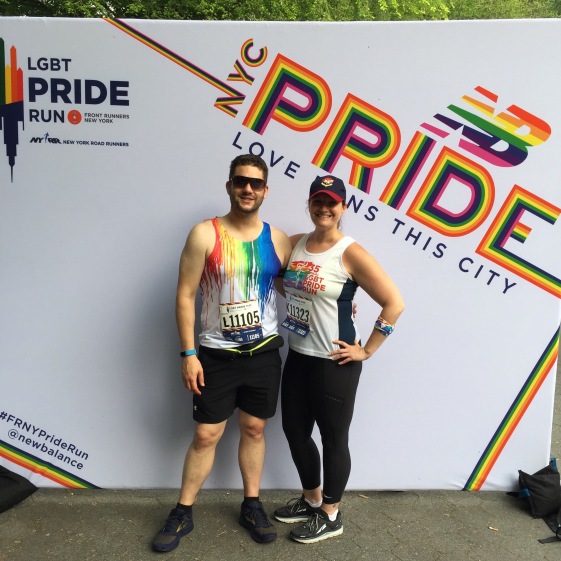 We arrived at the start area at around 7:30 or so and killed time by posing for photos and covering ourselves in sunscreen until our other running buddy, Stephen (aka Lady Champagne Bubbles), arrived. 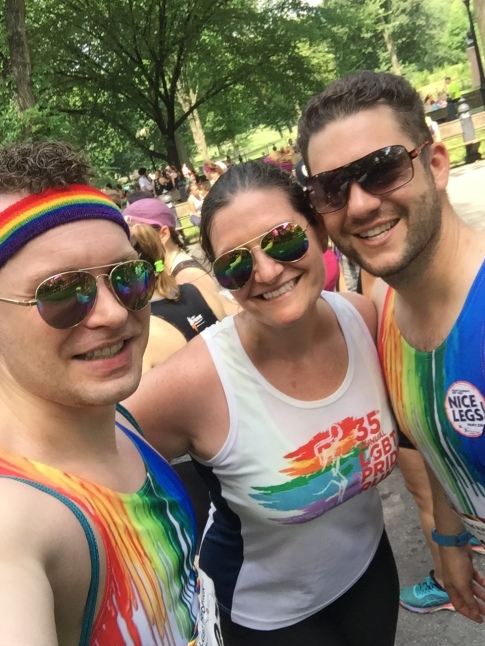 We ran into a few other friends doing the race while we made our way into the corrals and hung out waiting for the starting gun, and the sweat we’d broken into before even starting the run should have told me what I had to look forward to. I say again: I was not prepared. 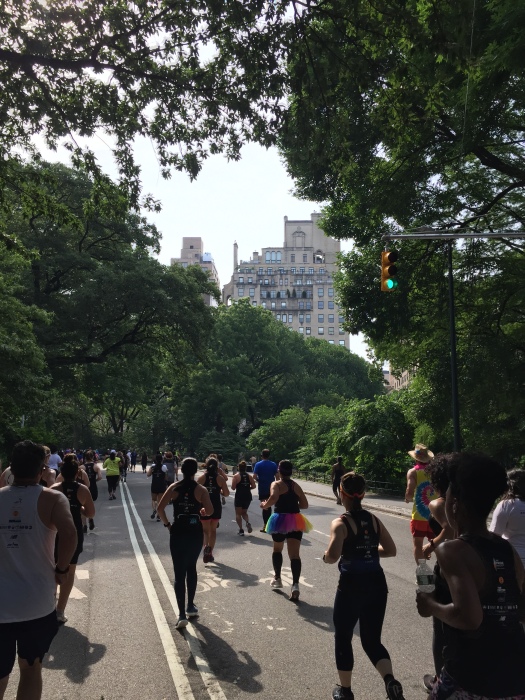 As we crossed the starting line, we took off at a pretty solid 12:00-ish/mile pace. Stephen cantered off ahead because he’s in MUCH better shape than me, but thankfully Kevin hung back and took it easy with me. Every quarter mile or so we’d catch up with Stephen who waited for us, but by about mile 2.5 I realized I had pretty much used up all I had in the tank.

It was a miserable feeling. I’d run these hills dozens of times before. In much worse conditions. Hell, I ran the goddamn 2017 NYC Marathon in rain for more than 6 hours!! I really should just listen to the universe and pack it in. Why should I bother when all I do is finish after all my friends and get injured anyway?

All those negative thoughts you get in the middle of a race? I had them. 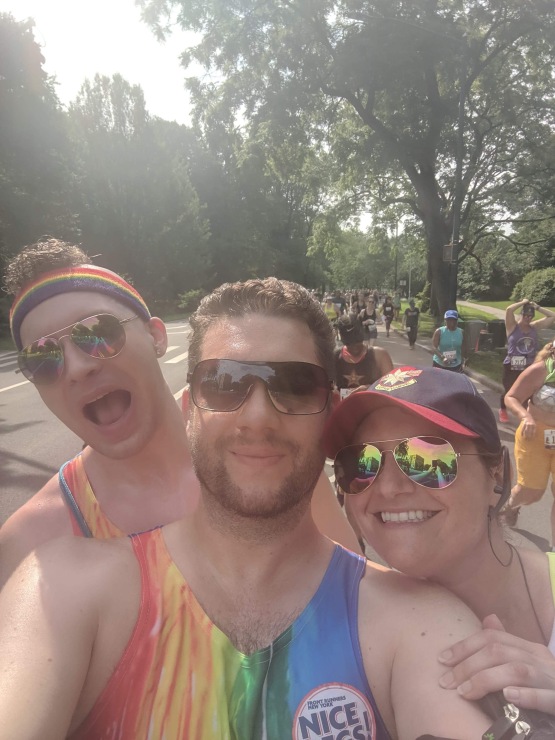 I mentioned my insecurities to Kevin at one point and he talked me through them – saint that he is – but while he helped my mental game, my physical game was just too far gone. My therapy had been focused on isolating the muscles that were causing me pain, working them gently and slowly strengthening them. The lack of running while focusing on those smaller, foundational things really sucked a lot of conditioning out of me.

Thankfully, I wasn’t SO far gone, and we made it to mile 4 relatively soon. Kevin made deals with me to get to the next light post, the next stop sign, the next tree. It worked, sort of. There was a lot of walking. But once we got to the final half mile or so, I realized I’d done it. Kevin asked if I was OK with he and Stephen taking off and finishing strong, and I said go for it. The only thing that makes a miserable race worse is knowing you held people back.

So off they went and I hunkered down for the final sweaty, breathless half mile. The nice thing about the Pride Run is that in the final mile, all of the local running clubs come out to cheer you on in the final mile or so. And because it’s Pride, the music is bumping, the energy is high, and the love is on full blast. All I had to do was shift to the side of the course and hold my hand out as I ran, and I was rewarded with high fives and screams and cheerleaders galore.

All that excitement was just what I needed to get down the last hill and over the finish line – and for Kevin to snap this hysterical picture of me thanking the running gods that the damn thing was DONE: 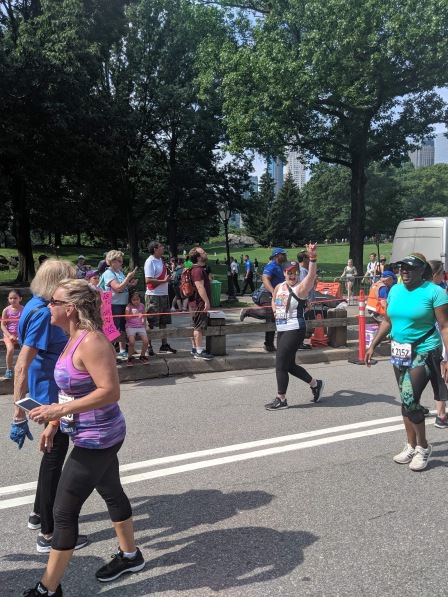 Afterwards we all hung out for a bit eating the rainbow ice pops they handed out at the finish line and taking pics – of course I can’t let Stephen take a nice photo just one damn time – before heading home to recover in the air conditioning. 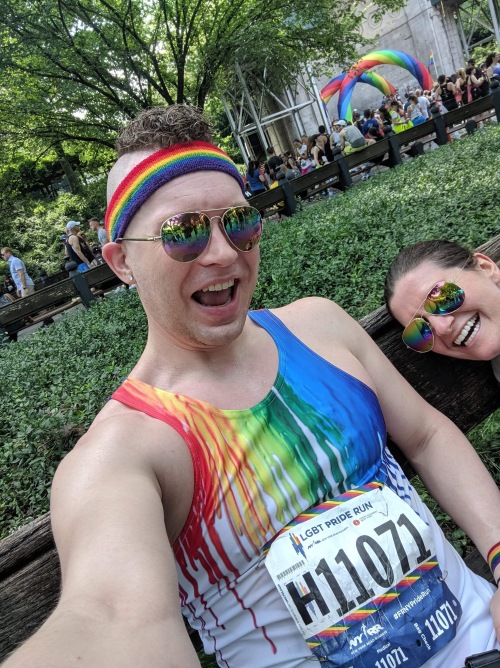 As always it was a great race that I highly recommend, especially for first-timers. It’s high-energy and a wonderful way to support a fantastic cause that is dear to my heart.

It’s been a minute, I know!

Yes I haven’t posted since February. No I don’t have any good reason for my absence. Or at least nothing dramatic.

The short version: Life got busy.

Long version: The injury I was flirting with before the NJ Half turned scary in March. My leg started giving out on me in double digit runs in the weeks before the race. I got up to 10 or 11 miles in training but they were junk miles, and frankly, having my leg give out on me because of electric shock numbness? Figuring that out was more important than a medal. So rather than risk further injury, I dropped out and have seen two orthopedists and have been going to physical therapy for all these issues basically two times a week since May. 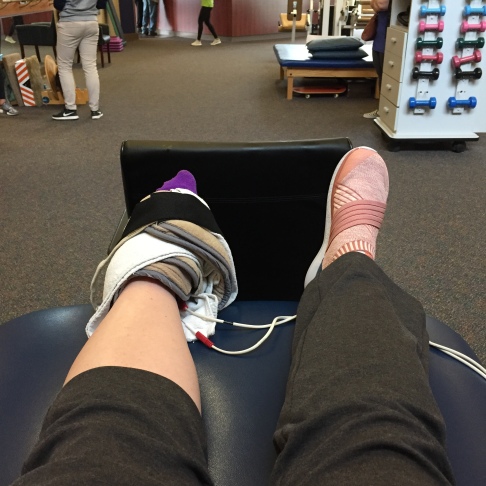 My issues turned out to be a combination of Achilles tendinitis and a nerve problem that we still haven’t gotten to the bottom of, but I’m living with it and running with it. I still feel numbness and tingling when I turn my foot in a certain way or overextend it while walking. This is just something I have to get used to (according to both orthos). While I’m not running the distances or times I used to, I’m still running.

And I’m feeling much stronger now thanks to the work I’ve been doing with my physical therapist Dean at Twin Boro Physical Therapy. No, seriously, Dean is like, invited to my Christmas Eve party from here on out because he’s been so incredible for me. He’s a runner and gets the neuroses that come with that title. He went on vacation and I was despondent. We share Netflix recommendations and trade our favorite Bill Burr comedy bits while he works on me, and he’s learning how to ride a scooter now that he and his girlfriend have purchased one together.

OH I also took the European vacation of a lifetime with my husband to Jersey and the UK. 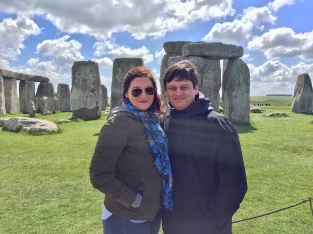 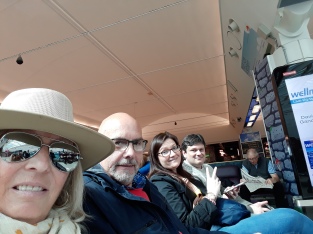 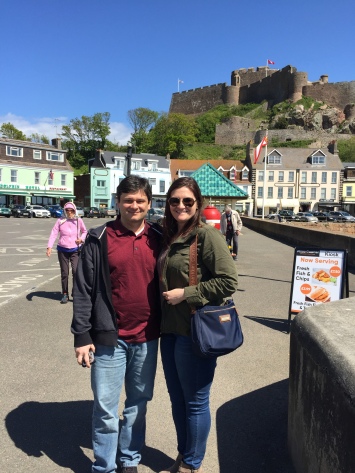 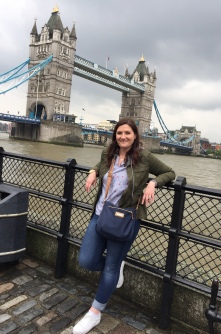 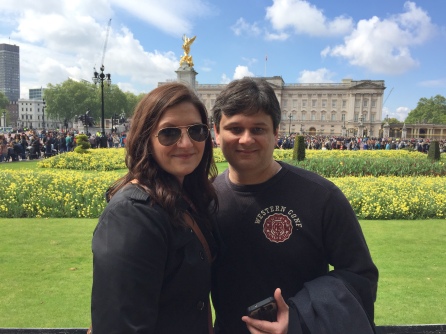 It has been a long time and a lot of other stuff has happened, all of which I promise I’ll write about soon. But I just figured now that we have a new, more powerful wireless router that reaches into my back office and makes it easier for me to write, I may as well send out a quick carrier pigeon here to let ya’ll know that I’m not dead.

I may have had to reset my wordpress password because it’s been that damn long, but I’M BACK BABY!