After a great day on Saturday celebrating our anniversary in NYC with dinner and The Book of Mormon (holy crap was it funny!), I set out Sunday morning for my 8 mile run. Because I was drained from Saturday’s adventures, I missed my running club’s group run at 7am and instead decided to log the miles in my hilly hometown. After dragging ass down to the boat docks I used to work at in college, I greeted the sunrise and took off. 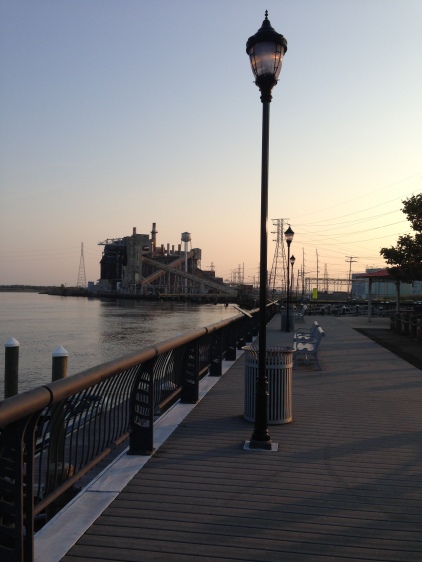 This training cycle, I’m aiming to keep my long runs at around 1:00-1:30 slower than my race goal pace to save my legs for speedwork during the week, so I plodded along for the first few miles at 12:15/mile. The breeze was gorgeous, the roads were empty, the town was so peaceful! By mile 3.5 I had looped back to the waterfront where I used the blissfully clean bathrooms and set off in another direction.

The only thing better than a clean bathroom? A PINK bathroom.

For the last 4 miles, I took a more hilly route through my best friend’s old development. After years of exploring the area with her, I know those twisty roads like the back of my hand & I love the peaceful, Edward-Scissorhands-y vibe the rows of houses give me – plus, the folks there REALLY love their lawns, so the abundance of sprinklers makes summer running a joy. 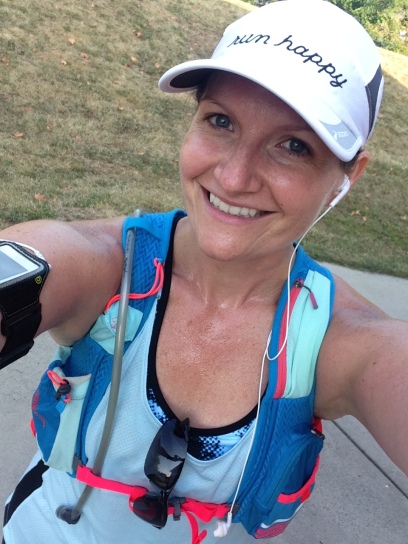 Exhibit A: a joyful runner

But those hills were hard, and I fought through miles 4 and 5. By 5.7, the tightness in my hips was too much. All I could think of was sitting on the curb for a hot minute to stretch and gather my strength for the final 3. And once I sat, it was glorious.

Until HE pulled up: my first creeper.

He spotted me as he turned onto the street in front of me and started yelling out his window at me. “I just have to say, I know you’re busy, but you’re a beautiful woman!” I thought that’d be it so I just smiled and nodded in thanks and looked down at my watch as I continued to stretch. But he wasn’t moving. “You’re doing your thing, you look so peaceful and zen-like! You look so content and happy, you remind me of that movie, you know the one where the men are making their way to the end of the tunnel and they see the woman at the end and all they’re thinking of is one of three things: dying, sleeping, or having sex.” At this point I started laughing uncomfortably – he was more than your average encouraging passerby. I fiddled with my watch some more and ignored him but he kept going. I only caught snippets as other cars tried to get around him, honking at him. For a good 2-3 minutes he continued. “You’re like the warrior woman, dressed like that with her gun holster, at the end of the movie – she’s in pain, she wants it to be over, she knows the Illuminati are trying to kill her…” [editor’s note: “Illuminati”?!?!]

At that point I nodded and did the “OK, yeah, thanks…” bit and stood up so he’d leave, but he kept going! “What does your husband think of you doing this? Does he support you?” I should have ignored him but instead I engaged him (I know, stupid Jess) and just said, “Yes, he does. He loves it.”

I don’t think he expected that – maybe he was waiting for me to say I didn’t have a husband? – because he paused, then said, “Well you tell him – you tenacious, beautiful, woman – that he should take you out for a wonderful dinner tonight, to Red Lobster, and that you drink all the wine you want, and then he needs to take you home and perform to your satisfaction, or someone else will.”

WHAT?! Because I didn’t know what else to do, I just kind of laughed incredulously and turned my back and walked away. That’s when he got the hint and wished me a good day and drove away.

I won’t lie – it shook me up. I’ve been running for 5 years now, and this is the first time I’ve been legitimately disturbed by a creeper. I know I wasn’t in physical danger – he was in a car 20+ feet away from me – but it really rattled me. It was one of those situations where you don’t realize how creepy it is until you’re already IN it and can’t get out.

Once I watched him turn the corner in the opposite direction I was headed (and made a mental note of his car’s make/model/license plate/bumper stickers so I could spot him again if needed), I immediately took off at a full sprint out of that development and didn’t look back. Those final 2 miles were faster than planned, but all I wanted to do was go home and not go outside again. 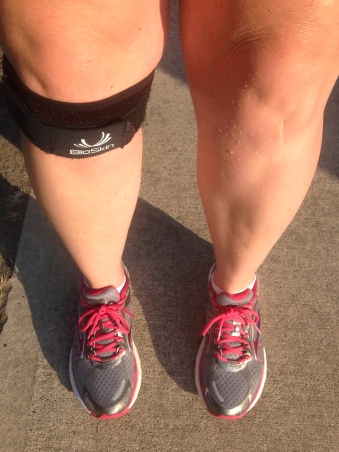 I’ve never sweat from my knees before those last 2 miles.

My final tally was 8.1 miles with an average page of 12:59 (thanks to the fact that I forgot to stop my watch during the harassment). My knees felt great, my lungs were burning from the final push to get back to the car, and my quads were fried from the hills. Overall, it was a good run, but once it was over, I started feeling all of the things.

I seriously doubt if I want to go back into that development even though it’s one of my favorite places to run! I’m even feeling guilty – did he go from zero to pervert in one sentence because I smiled and didn’t ignore him and walk away? And if he didn’t leave me alone even when cars were stopped behind him and honking at him to move, what’s to say he wouldn’t have followed me if I ignored him? I’m always smiling and love the friendly waves and “Keep up the good work!”‘s from random strangers I pass while I run. Do I just shut it down and avoid everyone now?

I know I’m probably over-reacting. It wasn’t a guy chasing me or trying to attack me physically. I’m fine, and will live to run (albeit guardedly) another day. But this situation opened my eyes to the other, less apparent threats that I could face. As female runners we’re taught the obvious when it comes to protecting ourselves: go for the eyes if you’re attacked, never leave your phone at home, carry mace, etc. That’s all good for physical attacks, and I pray that none of us will ever have to put that knowledge to practice. But what about the random creepers that just don’t know when to quit?

What do you think – have you ever faced a creepy situation on a run? What did you do?

34 thoughts on “My First Creeper”