What an active weekend I had! I like to think the buildup to Boston inspired me 😉

Let’s start with Saturday. A beautiful sunny warm spring day, I met up with a new friend for a virtual 5K down at the local park. We registered for this thing back in January, mainly because it’s a race that encourages the consumption of donuts, and you also get a fun pig nose to wear for ridiculous pictures afterwards. It was a win-win! 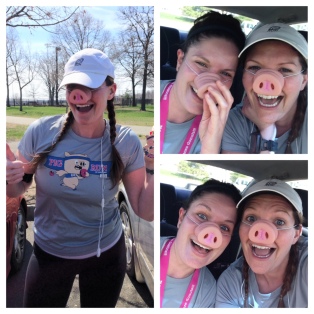 Wow did we have more fun than expected.

We jogged and walked (this being my friend’s first 5K) and had a nice workout in the process – I managed a 8:30 pace for the last quarter mile and surprised even myself! So after we finished and posed for some hysterical pictures, we headed to Dunkin for our celebratory glazed with sprinkles (and iced coffee, of course), then strolled around town for a bit. My adventurous friend spotted the South Amboy train station steps and suggested we tackle them Rocky-style, and who was I to say no? My knee was feeling nice and strong thanks to the last month of serious training, so I went for it! 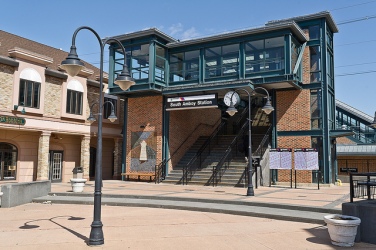 I blame my delusions on the donut-related sugar high.

In hindsight, I probably should have passed on the steps given my plans to run 10 miles the next day. I used to do stairs all the time, pre-surgery. But they’re a special kind of hell – one that I haven’t really experienced in over 18 months.

So I woke up feeling fine and set out for my last long training run and also my longest post-ACL surgery run! Immediately the wind became an issue, but I stuck it out – until mile 7.5. That’s when I hit the wall pretty hard, and briefly considered asking an elderly man sharing the path at the park with me for a ride on his Jazzy.

But this wall wasn’t like any other wall I’ve hit before – this wall was more like quicksand. In the past, my lungs would give up on me first, resulting in stitches in my side and constant stopping. But yesterday, it was all in my legs and hips. They wouldn’t turn over! My lungs felt absolutely fine, but my legs felt almost numb when I was running, and ached and throbbed when I stopped to walk for a drink. I alternated between walking and running the last 1.5 or so just to test my limits and see what I could do – and that pain was shocking! I kept at it though, and remembered that I’m only racing myself here. Time isn’t important, it’s getting the mileage in. So I kept at it. And at mile 9.4 I saw the best graffiti ever:

That gave me the push I needed to finish mile #10 and put my final long run in the books. I stretched and foam rolled, and later (after gorging myself on Easter deliciousness at my mother-in-law’s), I iced and used my TENS unit too. It wasn’t until about 9pm that I realized WHY I was so pained in the last half of my run – those damn stairs!!

So now I know: do not run up and down a flight of double stairs 6-8 times the day before a long run. Lesson learned.

What are some of the lessons you’ve learned (maybe the hard way) in your running? Let me hear it!