Today, just like last Wednesday, I decided to do cross-training instead of running the miles that were on my plan. At this point, I don’t want to subject my knees to 3 days of running in a row just yet. I had a simple 3 miles today, so I opted to take a free 45-minute boot camp class with my friend before work instead of running for 45 minutes.

Which it turns out was kind of like opting to shave my head and setting my scalp on fire instead of combing my hair.

Anyway – I heard about this class randomly on Facebook at 9pm last night and was intrigued: Back in 2010, I’d taken this very same boot camp for about 3 months when the camp was just starting out. Three times a week after work, I’d join 10 other sweaty folks in a garage for an ass-kicking of epic proportions. Then, with wedding planning in 2011, life got hectic and my wallet got tighter so I didn’t go back. Fast forward to now, when I’ve been looking for something fun and intense to add into my training.

So I asked my friend who is currently a boot camp regular if he wanted to come with me, and he said yes (yay!). Then I set my alarm for 5:20, laid out my clothes, and went to bed early. Waking up before the sun was not something I enjoyed, but when I got there I was greeted with the same old familiar face of the class leader (who did not remember me) and the same old ridiculously insane workout. 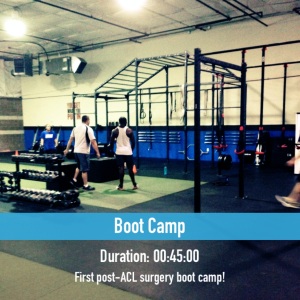 I’m surprised they didn’t give me a mop afterwards to clean up my sweat.

After warming up with 5 minutes of jumping jacks, planks, and stretches, we broke into groups of 6 and jumped into 40-20’s: Alternating between 40 seconds of 2 exercises 8 times at each of 4 stations, with 20 seconds of rest between each set (MATH!). The punishment began immediately with ball squats/wall ball tosses, followed by 24 inch box steps. I purposely wore my knee brace to keep myself under control (and frankly, to get the instructor to cut me some slack if it looked like I was wimping out), but I surprised myself with my leg strength!

The rest of the workout got progressively harder as I got weaker: 44lb overhead bar presses and 10 squats/1 sprint with a 10lb sandbag on my shoulders, TRX cable tricep dips and kettlebell tosses, topped off with sled pushes across the length of the gym and lifting a tire that may as well have weighed a thousand pounds because my jelly arms couldn’t even lift the damn thing. Seriously, I spent all 4 sets of those tire presses with the stupid thing around my neck because that’s as far as I could lift it.

By the end of the 45 minutes, I was shredded. I haven’t done a super-high-intensity workout like that since before my injury in October of 2012, and that fact was very apparent. I started struggling at just 20 minutes in. It was a wake-up call: I’m nowhere near as strong as I used to be. But instead of getting discouraged, I thought about how much stronger I’m going to be in a few months of training! It was exciting to get my blood pumping again, to feel the “totally spent muscles” burn, to gasp for air between sets.

I’m not saying I’m going to sign up for 3 times a week, but it was definitely a win in the cross-training department. What about you? Do you do boot camp (or Crossfit or TRX or anything else that makes you sweat like a beast)? What’s your favorite cross-training workout?