This week marked week 4 of marathon training, and it passed pretty unremarkably, until yesterday that is… let me explain:

Since it’s been a month, this was my first experience of training while PMS’ing. Which… WOW. That’s all I can really say. I don’t know whether my husband is ready to walk out or just throw a chocolate cake at me and be done with it. The combination of waking up early, being sore all the time and not eating my usual comfort foods made the holy trifecta of awful, and my hormone swings on top of everything else made it a pretty angry week.

My sucky run on Tuesday was mitigated only by the fact that I got to wear fun new Brooks “Run Happy” shorts that totally matched my shoes:

It was a hard 3 miles and my time was physically embarrassing, but it was done. So I went to bed angry. Then Wednesday I did yoga on the beach with some friends instead of running for my last “crosstraining instead of running Wednesday” and found myself doing some not-very-zen things like cursing the instructor and wishing I could be on the boardwalk eating curly fries and lobster rolls instead of getting sand where sand should not go with a bunch of granola-chomping hippies. Thankfully, the friends I did the class with were of the same mind, so things worked out.

We call ourselves the Yoga Misfits and we’re thinking of getting jackets made.

Thursday was pretty much the worst day ever. Work was a nightmare, my hormones were raging, and I physically couldn’t bring myself to break through it and go for a run. I promised myself I’d go first thing Friday, but to keep myself from murdering someone, I instead had some chocolate cake and went to bed angry at 9:30. I considered it a public service.

It worked, because Friday morning I turned a corner. I churned out 3 faster miles and rocked out to some “We Didn’t Start the Fire” and even had a woman drive by and applaud me (her kid in the car seat behind her was clapping too)! That gave me some good motivation to rock my long run, so I plotted a course that took me through 3 nearby towns, went to bed early Saturday, woke up early Sunday and had hubby drive me 10 miles out to begin my first double-digit run on this training schedule!

It was overcast and actually kind of cool out, which was a very nice change from the 85 degrees I’ve been running in the past few weeks. However, it was still humid as hell. And so I was drenched by about mile 2, which I discovered when I stopped for an emergency bathroom break:

When will I learn and not pick light colored shorts?

Even despite the beautiful view, the good pacing, and a solid fueling plan, I had soaked clean through my shorts, thus rendering null and void any cool points I had accumulated up til then.

I kept at it though and felt OK til about mile 6. Glancing at my watch, I realized I’d been running for more than an hour so I took a break and grabbed some water from my belt to wash down some Sport Beans. That’s where the day took a turn.

The bottle I carried my water in had been stored in the cabinet I keep all of my scented candles in, too. And it also gets very hot there. Thanks to osmosis, the various candle scents had permeated the plastic of my little handheld Nathan water bottle, making my water taste like every damn Yankee Candle I ever owned.

Which tastes like exactly what you think it does.

After taking my first horrible gulp of funk-water, I gagged on the side of the road and panicked: I still had at least 2 more miles to the Quick Check I had planned on getting water from, and these Sport Beans had turned my mouth into a foul pasty desert!! But I sucked it up (literally), swished some nasty candle-water around my mouth to keep it hydrated, and walk/jogged the next 2 miles to get fresh water.

When I arrived at Quick Check, I downed a bottle of water so fast I gave myself a brain freeze, then walked back outside to find that it was POURING! So I took it as a sign and waited, stretching for a good 5 minutes while the rain subsided. Once it cleared, I set out again and thought “2 more miles! You can do 2 more miles, that’s nothing!” and sure enough, I did! I wanted to quit a few times, but I found that this 10 miler was much better than the 10 miler I did while training for my last half. Then, I wanted to give up at 8 and had to walk almost the entire last 2 miles. But yesterday I pushed through, found a few new songs on my running playlist and made it all the way to my parents’ house at mile 10.00, where I promptly collapsed in a heap of hair and sweat. 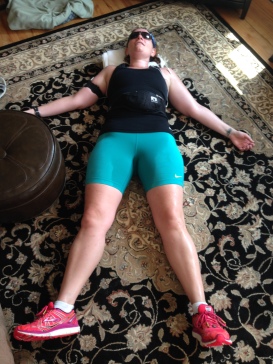 So while I was a little frustrated with how much I had to walk after the candle-water incident, I’m pretty proud of my final push. It was a strong finish to an otherwise so-so run, and I’ll take it!

However, last night while basking in my post-long-run bliss and updating my training diary, I discovered that I’d read it wrong: as it turns out, I was only supposed to do 9 miles yesterday. 10 is next week’s long run. So that means I have to do this all over again.

Excuse me while I go sit in the corner and rock back and forth, crying and laughing uncontrollably.

How did your week go? Any training milestones you’re proud of? Have you ever read your training calendar wrong and screwed yourself? Please tell me I’m not the only one!