This past Saturday, I ran in the Seaside Semper Five charity 5K down in Seaside Park, NJ – and it was fantastic! If you’re an NJ local, this is a must-run. 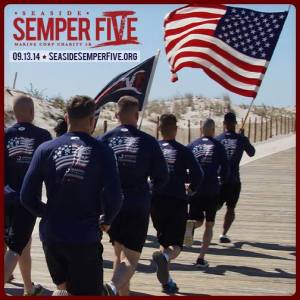 I first heard about it back in May or June, when the Seaside Semper Five Instagram account followed me and liked almost all of my running-related posts. I checked them out and learned that they were planning a 5K race on the Seaside boardwalk in September to benefit the Marsoc Foundation, which supports active duty and medically retired Marine Corps Special Operations Command personnel and their families, as well as the families of Marines who have lost their lives in their service. A nice short run on a beautiful boardwalk for a worthy cause? Count me in!

I convinced my friend Ashley (a fellow member of the Yoga Misfits) to run with me, and she recruited her husband as well. 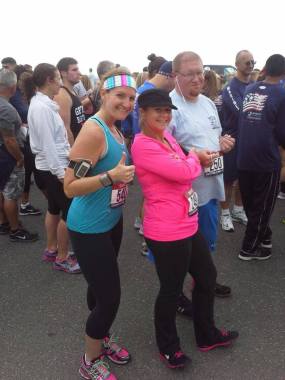 He was clearly thrilled about the endeavor.

It ended up being a cool, WINDY, cloudy-ish morning, which in the grand scheme of things, isn’t the worst running weather. 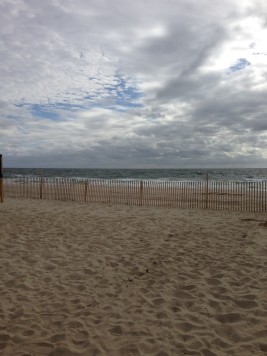 It sure made for pretty running scenery.

We hung out in the Sawmill debating on whether we would run in long sleeves or switch to tank tops (final tally me: tank, Ash: sleeves), and made our way outside to prep for the start. 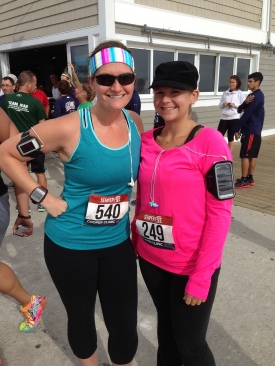 The Polish Runners. Our mascot is a flip flop.

After just a few minutes of the usual milling around waiting for the gun, we were off and running – at which point my left earbud promptly died at .15 miles in. Grrr. No matter, it was a great crowd with a lot of friendly energy, so I turned my volume down and settled into a nice 11:30 pace. I kept telling myself to slow down because I didn’t want to burn out – I’d been clocking 12-12:30’s throughout pretty much every training run below 10 miles since my injuries earlier this summer. But I felt so good – SO damn good – at 11:30 that I kept it up.

We ran for exactly 1.5 miles on the pavement right along the raised boardwalk, then turned left up onto the boards at a little water break at 1.5 and went back in the opposite direction for the last 1.6. I slowed for just a few paces to drink, thanked the volunteers at the water stop, then kept right on going. The wind was a little bit of a battle, but I still felt great at 11:30. I briefly thought it’d be cool to break 37 minutes, but didn’t bother doing any of the frantic mental math I usually do towards the end of a run to calculate my time. I just focused my energy – mental and physical – on pushing and finishing strong.

It was very cool to see the Marines running in formation at the very very end of the pack – as I neared the 2.5 mile mark, they passed me on the pavement below as they brought up the rear, chanting and carrying their gigantic flag. That gave me a little extra energy boost. So once I caught sight of the finish line, I gave my usual sprint for the last .25, and was super stoked to see 36:30! 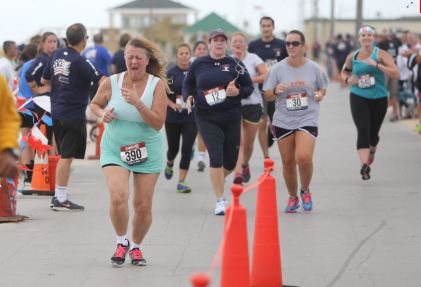 However, just as we got to the finish flag (not the timing mat), the girl in the gray t-shirt in front of me up there decided she had had enough, and STOPPED before the finish line. She evidently thought she’d crossed the finish line, but people even started yelling, “Keep going! Keep running, cross the mat!” 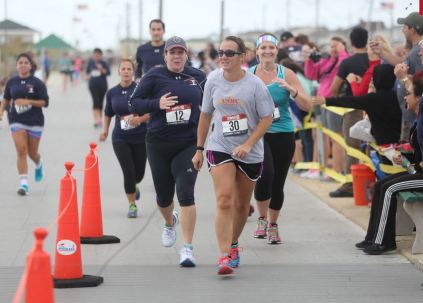 Fig. 2: My “wait, is she really stopping directly in front of me?” fake smile because I saw the camera and didn’t want them to capture my bitch-face.

So I had to do some creative bobbing and weaving to get next to her, and officially crossed the mat at 36:44. 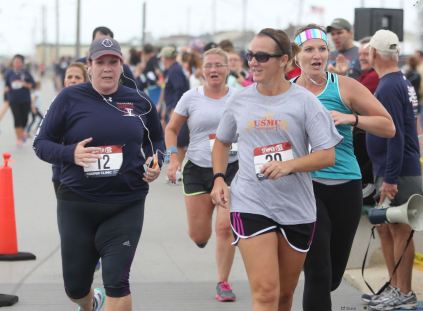 All in all, it was a great race! We hung out for a while and watched the rest of the runners finish, cheered on some more Marines that ran it, and then Mike and I even hung out on the boardwalk for the rest of the day because we didn’t want to waste the $10 we paid in parking fees by leaving early. 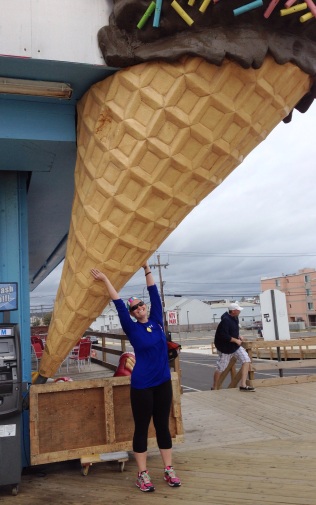 The only complaint I have is that the race was scheduled as the same day as ClownFest (yes, a festival for clowns), and I am TERRIFIED of clowns. What’s worse, the creepy stormy weather meant there were no kids around, so the clowns that were wandering around had no one to play with, leaving them to terrorize the adults. Much like sharks, they must be able to smell fear, because they were all over me. I didn’t realize I could have so many mini panic attacks in a row.

But in all honesty (ClownFest aside), it was a great race and I cannot wait to run it again next year. Thanks to the organizers for a very well-organized and fun event! 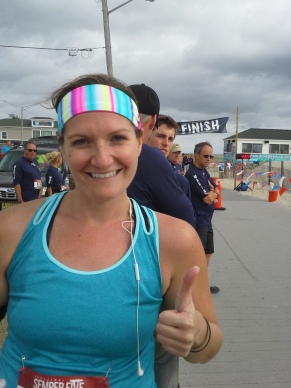