Hey there everyone! I’m sorry I’ve been MIA lately – the usual holiday madness coupled with work insanity had me running pretty ragged until this week. But I’m back, and I hope everyone had an awesome holiday filled with love and laughter and family (and let’s be honest: lots of wine)!

With 2015 on the horizon, everyone’s talking about resolutions and goals and all these great plans for the New Year. But before I do that, I’d like to take a minute and reflect on the past year first. Yeah, it’s fun to remember all the great times I’ve had while running in 2014, but more importantly: looking at how far I’ve come will help me set smarter goals for the year ahead! So to help me do just that, I’m going to take a different approach on my year in review and look at my favorite lessons learned from my favorite races of 2014.

This was my first race in nasty weather: 30-ish degree rain, sleet, and snow – it was also my first race in sand, too! But instead of focusing on all the things that were miserable about the day, I ran happy from start to finish. I mean come on, look at that dork in the gigantic winter coat up there. Clearly I gave two figs about the sleet and just enjoyed it.

At that race I learned to just go with it. I’d been lucky up til that point and had relatively perfect weather for every race I’ve run in the past 4 years. But the nasty weather during this run taught me that sometimes you’ve just got to suck it up and tough it out to get through it with a smile – because that way you’ll end up with some fun race pictures!

I had a lot of anxiety coming up to this race. I didn’t necessarily follow the training plan 100% and was still leery of my knee in certain situations – and if I’m being honest, my superstitious mind had me convinced that I’d suffer the same fate as I did in the half before this one!

But I went out with the same mental attitude I found in my beach run that winter: just go for it with a smile. And what I learned that day is that anything is possible if you really put your mind to it. I hit the wall at mile 11 and didn’t really see myself crossing the finish line as triumphantly as I’d imagined, until I realized I was so close to a PR. My unofficial goal had been to beat my injured race time, and I just barely did by a few minutes, in tears and completely elated. While it wasn’t the shining, time-crushing win I had hoped for, it was still a win because I put my fear of the half marathon distance to bed for good!

In September I had signed up for a handful of races before my big October race, and had told myself from the beginning not to push it. So while I approached these races as fun runs and went in with no expectations, I ended up surprising myself with both my results and the lessons I took away from each race.

In Seaside I lost my music a few feet into the race, and then decided to run without looking at my Garmin the entire race. When I got to mile 2.75 and realized I was blowing away my old 5k training times, I floored it and finished under 37 minutes!

A few weeks later I ran my first race with a cold at Liberty State Park for the Make a Wish Foundation, where I stopped to blow my nose every quarter mile and coughed through the end, and still came in only 10 seconds shy of my time in Seaside – proving to myself that all that training really does help!! While it may seem like I’m going nowhere fast between injuries and schedule setbacks, the miles really do add up and train you to perform some truly amazing feats that you never thought your body was capable of – and that’s pretty freakin cool if you ask me! 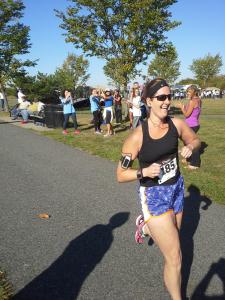 4. Making Friends at the Atlantic City Half Marathon

Throughout the summer I’d been plagued by recurring knee and calf injuries that eventually forced me to drop from the full marathon to the half, and my ego (along with my joints) were still pretty sore over it. Before I even toed the start line, this race had taught me that sometimes things don’t go your way, and you need to change your goals. That doesn’t make you a failure, it makes you smart. It was one of the hardest lessons I’ve had to learn in a long time, but it was worth it.

While this race was supposed to be my first full marathon, it ended up being an even more important “first” – my first race with a running partner, who taught me that the road is a lot easier to travel when you’ve got a friend by your side. 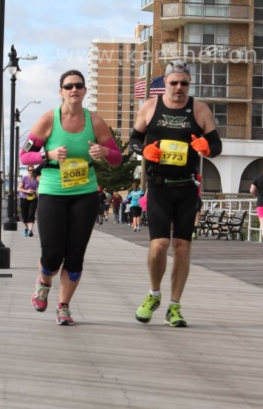 In my 4+ years as a runner, I resisted running with others because I was afraid I’d slow them down or I’d tire too fast from talking. I met Alain through The Mermaid Club, and while we hadn’t ever run together before race day, we covered the entire 13.1 miles practically joined at the hip, chatting about everything from Melissa McCarthy movies and gummy bears to religion and family. We kept each others’ minds off of the task at hand and off the wind fighting us at every step. When I didn’t think I was going to pull a PR out of thin air, Alain told me matter of factly that I WAS, and he was right. It turns out that the old saying is true: “if you want to go fast, go alone. If you want to go far, go together.”

5. Living in the Moment at the NYRR Dash to the Finish Line

This was an unexpectedly meaningful race for me. Originally I was simply excited to run my first race in NYC and cross the Marathon Finish Line the day before the big race. But from the moment we crossed the starting line in the pouring freezing rain, I realized that this was going to be much more than just a little 5K. 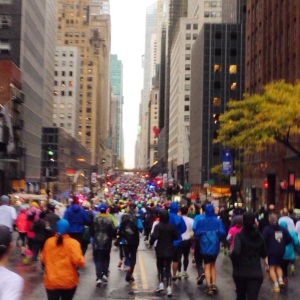 Being surrounded by almost ten thousand other runners from all parts of the world, the amazing skyscrapers of Manhattan, the tourists and locals standing on the streets cheering us on – it was a completely surreal experience. On more than one occasion I glanced around me and told myself to soak it all in: this was what running in the moment was all about. I’d never run in NYC before, but I was instantly hooked and couldn’t wait to return. Even though I was overdressed and overheating, I bobbed and weaved through the crowd (and added .75 to my distance!) and still managed to PR by an astounding amount. 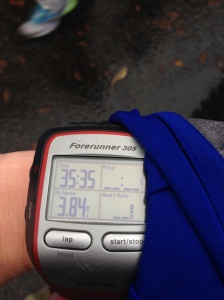 While it was “just a little 5K in the park”, this race renewed my love of running and showed me that there’s this whole world out there just waiting for me to run all over it! Because of this race, I signed up on a whim for the NYC Half Marathon in March, won an entry, and now find myself a week into training for what’s probably going to be the coolest half I’ll ever run – and I can’t wait!