Last year I ran the Seaside Semper Five 5k for the first time and fell in love with the race – I mean what’s not to love about a fast, flat 5k that runs along the boardwalk for 1.5 miles and ON the boardwalk for 1.6? My 2014 time was one of the year’s best, so I was excited to see what 2015 would bring.

The morning of the race we headed down to the shore. And man, it was FOGGY!

In addition to the fog, I was surprised at just how HOT it was already. The week prior to the race saw morning temps in the gorgeous 60-65 range, but mother nature still had some summer up her sleeve and it was already 75-ish degrees! 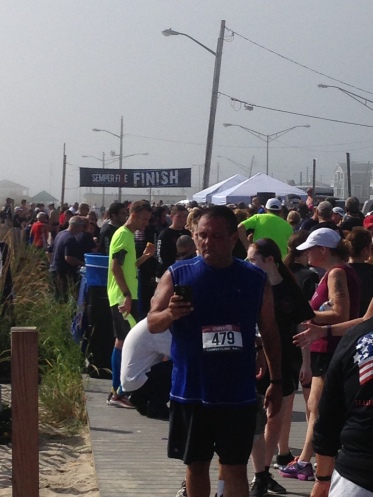 After finishing half a bottle of Cocogo to top off my fuel levels (since it had been more than 2 hours since breakfast), I made my way over to the start area and began to loosen up. I sang along to my music, dancing to Uptown Funk, wiggling and jiggling and getting excited. I was feeling good!! PS, yeah I know I’m that girl when I sing and dance to myself at a race. #sorrynotsorry

It was especially nice to be surrounded by some really inspirational folks at this race. It’s a fundraising event for the MARSOC Foundation, which supports active duty and medically retired MARSOC personnel and their families, as well as the families of Marines and Sailors who have lost their lives in service. The Marines and veterans running the race are some of the most dedicated folks I’ve ever met, and it was an honor to run with them.

The gun went off a little after 9 and we took off through the haze and heat. It was crowded but not too bad – I didn’t find myself getting passed by EVERYONE like I sometimes do in these smaller races. In fact it was the opposite – the first mile clicked by almost too easily at 10:30 – who was I?? I didn’t feel like I was pushing at all, so I kept on, but that heat though – UGH! By the water station/turn onto the boardwalk at mile 1.5, I was desperate for water. The poor kids at the table didn’t know what to do with the runners clamoring for the little cups of water they were pouring from bottles, so they handed out the full bottles instead. Smart kids! So I grabbed a bottle and continued onto the boardwalk for the next mile or so, sipping every 2-3 minutes with walk/run intervals to keep from overheating.

Around mile 2.5 I came up behind a gentleman with a faux-hawk who took a look at me over his shoulder, made a face that said “Oh hell no,” and took off. Thanks for the motivation, dude! My average pace had gone from 10:30 to 11:25, but I was determined to beat this guy and bring my average down again for the finish. I turned on my latest power song (Run the Jewels’ “Close Your Eyes”), cranked up the pace, and passed him at about mile 2.8, and just kept on going. This was my first time “chicking” someone – it felt good! 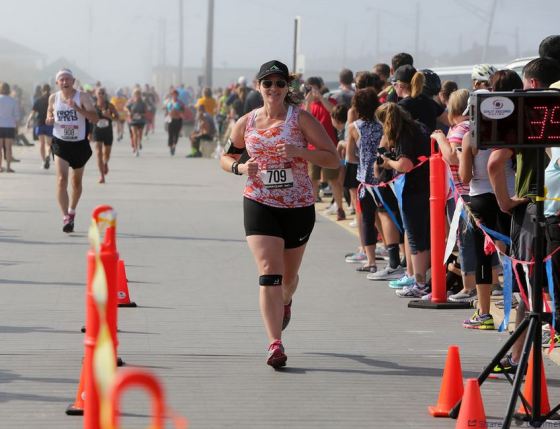 Nearing the finish line I saw 35:xx on the clock and kicked it into high gear, crossing officially at 35:26 (although my Garmin said 34:40, so neener neener)!

Considering I ran it in 2014 in 36:50, I’ll take either result! Mike found me and we walked back inside the Sawmill where I chilled out, stopped dripping sweat, and finished my Cocogo. 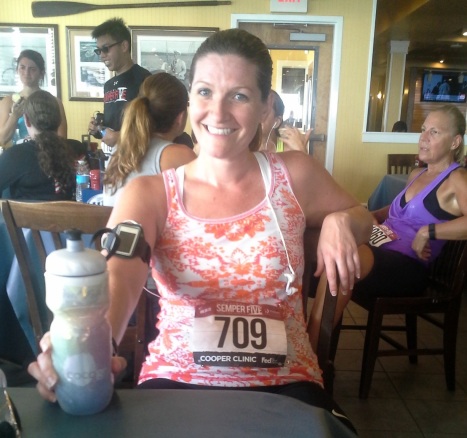 Within a few minutes I was feeling great again, so we headed down the boardwalk in search of some good old shore food.

The haze still stuck around, turning the boardwalk into a pretty cool scene!

This is what I mean by good old shore food: pizza bigger than my HEAD!

Also ice cream. I did not eat any, but I had to recreate last year’s gigantic ice cream cone pic!

We also met up with my cousin who had also run the race – Hi, Heather!

Once the haze was gone and the sun came out, I started to poop out. I had a triathlon the next day and forgot my sunscreen (BAD runner!) so I didn’t want to overtax my legs or my skin too bad. We called it a day and headed home to relax, and another successful Seaside Semper Five was in the books!

Honestly, my success at this race had a lot to do with my fueling. Usually I eat a lite pre-race breakfast when I wake up and end up racing at least 2 hours later, which doesn’t leave enough fuel in the tank. This time I planned ahead with my Cocogo and sipped continuously on half a bottle for about an hour before the start once we arrived, and I was thrilled with my performance. My energy levels stayed consistently high throughout the race (no mile 2 slump) and my stomach stayed cramp-free! 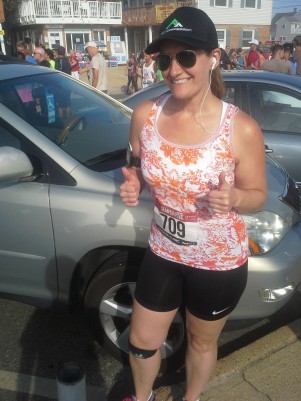 I’ve tried a lot of different fueling options in the past, but for my day to day runs and shorter races, Cocogo is the answer for me! If you want to try some out for yourself, I’m super excited to announce that I’m a new Cocogo Ambassador, and I’ve got a great discount for you! Use code JESSRUNSHAPPY and get 20% off your order through the end of October – after that, the code will get you 10%, but why wait? Pick up a box and try it out for yourself today! Let me know what you think – I love the raspberry/passion fruit, but grape is slowly becoming my go-to. What about you? 🙂