Every September I run the Seaside Semper Five 5K with the Marines down the shore in Seaside, NJ, and every year I have a blast. It’s my only legacy race, meaning I’ve run it every year it’s been held since 2014, and I hope to continue that tradition as long as my legs will carry me. 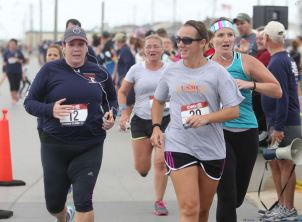 This year I went into the race with a good attitude; I’d just come off the high of crushing the Fifth Avenue Mile the week before and while I was a little sluggish from focusing on strength training in the week leading up to the race, I was ready to test myself out at this distance again.

We rolled up to the start area at the  boardwalk at about 7:45 after finding easy parking as usual in the streets along the beach, and met up with our crew to get our bibs and shirts and hang out. It seems every year our gang gets bigger – this year we had a total of 7 runners/walkers and 2 support crew.

Having had success with my pre-race fueling at the Fifth Avenue Mile the week prior, I tried to capture lightning in a bottle a second time and packed a half a PB&J for about a half hour before the start. Spoiler Alert: it didn’t go as well.

But it did make for a hysterical photo series that Liz should probably win some awards for. Pulitzer-level stuff, this is.

We killed time before the start, then mashed into the boardwalk with everyone else. Liz continued to document the experience with her camera, and caught a moment she calls “WORDS”:

So we had like, zero fun while waiting, as you can see.

Another fun fact: Ed here (left, with the race bib) and my husband Mike have this uncanny ability to unintentionally match, like… 90% of the time we all get together. I’m not kidding:

It’s a game we play now. And the best part is, no matter what, we always win!

But back to the race…

The morning was cool, but the sun was blazing so by the time the gun was about to go off, we were all a little schvitzy.

Mike also caught some fun candid shots of me doing… something?… while we waited.

Where the pre-race PB&J worked for the mile the weekend before, the one I housed before the start of this race wasn’t sitting well, and once the gun went off, I developed a side stitch about a half mile in.

Through the years, I’ve gotten better at reading the signs my body throws me, and this morning, my body was telling me it wasn’t going to be one of those inspirational, kick-ass races like I’d had the week prior. The boardwalk was crowded with more than a thousand runners (yay for supporting a great cause but boo for overcrowding the race course) so it was tough to get a rhythm going, and my body felt heavy. No matter. Instead of letting it go to hell like I’d done in years past (see 2018), I still resolved to keep an eye on my watch and push as hard as I could.

The first 3/4 mile or so was on the boardwalk, and I ran until the only course water stop at around mile 1.5 on the road, where I took two cups – one to shotgun and the other to sip – as I walked for about a tenth of a mile or so. Having run the course twice already since they changed it in 2017, I knew there were some twisty turns before we hit the out and back turnaround at the farthest point, and I walked some more. It’s fun though, to see the groups of runners and Marines out on the course. 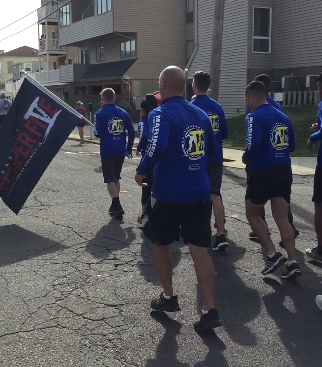 At the turnaround, a large pack of Marines caught up to me, chanting as they marched – and their chanting was exactly at the same pace I would need to stick to for a 12:00 mile.

Oorah! So I decided to latch onto their group and shuffled ahead of them for about a half mile or so, until they picked up the pace and got onto the boardwalk for the final 3/4.

I told myself to crank it up at the giant ice cream cone and did just that, powering past my friends for a solid finish-line sprint and a 39:58 finish.

Thanks, Liz, for being the best videographer and cheering squad leader on the course!

It was nowhere near my best time, but it was a solid effort. I pushed in places where I previously would have just said screw it, so I’ll take it as a win. And as usual, I can’t wait for next year!