I have no excuse for the last 2 weeks.

Well, no running-related excuses. Just a lot of life happening around here. And while I’ve slowly worked training back into my schedule, it hasn’t been my focus. Which isn’t necessarily a bad thing. After all, I am more than just a runner. I’m a wife, daughter, employee, friend – and lately I’ve found that life is more about balancing those different roles than focusing on one.

However! This is a running blog, right? SO. Let’s take a look at what’s been going on in my running world lately 🙂

When I last left off, I was bouncing back from a bout of hand, foot, and mouth disease (I refuse to call it coxsackie on principle alone) and I was also nursing a tender knee. After my last post, the foot blisters eased up in time for my return to running on my birthday, July 31st! 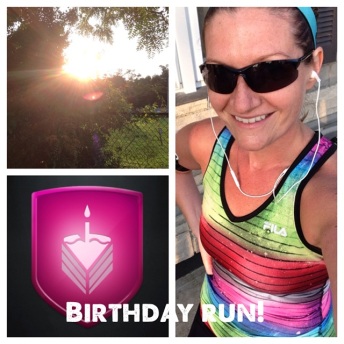 Full disclosure: I ran just to earn the Nike Plus badge.

My knee felt surprisingly great – the unexpected week+ off from running because of my illness gave the rest of my body the chance to heal up, and while I stayed cautious on downhills and stopping/starting, the sharp pains I had experienced the week or two earlier were nowhere to be found. Score!

Later that day, all I wanted for my birthday was new running shoes and cake, so we went to RoadRunner where I had my gait analyzed again, and discovered that all of my cross training and lifting has helped strengthen up my legs so I don’t need as much stability in my running shoes as I used to! Second score!! 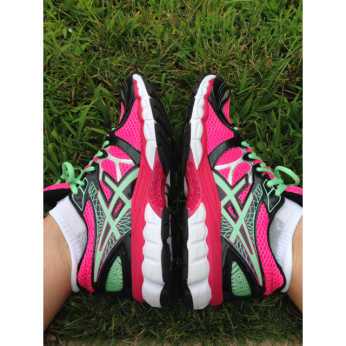 And when I broke in my new Asics Gel Nimbus 16’s on Saturday, I felt like I was running on air! Don’t you just love the first run in the perfect pair of new shoes? There’s nothing like it 🙂

Later that night, I went to a Soundgarden/NIN concert with a group of friends and let me tell you – Trent Reznor is still as hot as ever, and I will fight you to the death over him.

I love you guys. But seriously? I will cut a bitch over those biceps.

He was my very first rock ‘n roll crush – and while I was too young to see them live when my obsession was at its peak, the nearly 20 year wait was entirely worth it. So much so, that I matched my running shorts *and* my sneakers to my music as I rocked out to some early NIN on Monday’s run: 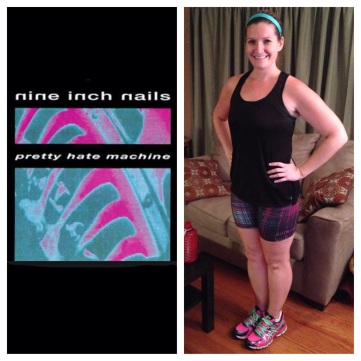 The rest of the week went by, with 3 progressive runs of 2.5; 3.1; and 3.5 to get my knees back into working order, with the goal of a long run of 5 miles on Sunday. Which I succeeded at. Just barely.

Because I set out too late in the day, it was hot. Like 90 degrees in the sun hot. I also only got about 6 hours of sleep, didn’t fuel very well, and drank just a bit too much on Friday, so my system was NOT long-run ready. But I tried a new route at the park near Rutgers, with a nice path that goes along the Raritan River, near the RU Stadium, past a little zoo, and under a couple of cool bridges. I’m all about switching up the scenery, and this did not disappoint – I will most certainly be going back there again!

But even though it was beautiful there, I struggled. I took a lot of walk breaks to deal with the cramps and side stitches I kept developing, but I powered through until mile 4.5. I passed a field were a pretty serious soccer game had just wrapped up and slowed to a walk to deal with a new cramp. The teams and their families were all packing up and chatting near the path, when one guy nudged another as I passed, pointing and laughing at me. I had one headphone in so I could only hear snippets, but once those two laughed, the rest of the group they were with all joined in too.

And it really hurt.

I took off running at full speed and kept pushing til I hit my 5 miles, then ran right for the bathroom where I had a little moment. I can usually brush off meaningless immaturity like that, but I was at a pretty low point to begin with, and that just pushed me over the edge into a full on meltdown. My confidence as a runner was tenuous at best, especially after the run I had just shuffled through at a snail’s pace. I was feeling weak and not very prepared, and frankly the thought of running a full marathon in just over 2 months actually makes me laugh because I think it’s that ridiculous and impossible.

But I couldn’t hide in that bathroom forever, so I sniffed it all back and repeated my favorite new mantra a few times: “One run at a time”, snapped an attitude-packed selfie because I was proud of how my legs looked in my shorts (#sorrynotsorry) and headed home for a shower and a big-ass cheeseburger. Because I’m a runner and that’s what runners do. We take it one run at a time and keep moving forward.

So how was your weekend? Tell me about it – is your training coming along nicely?

6 thoughts on “Right Back to Where We Started From”