Get ready for some full-on running love, folks! A few weeks ago, I learned that my virtual friend Helena (aka Head Mermaid In Charge over at The Mermaid Club) was going to be in my area on business for a few days. And when she suggested we meet up in NYC for a post-work run and a chat, I just about died. I mean, this was like a celebrity chef inviting me to bake cookies with them, or a famous singer bringing me onstage for a duet!

After having one of those, “try on and toss everything around the room while finding the perfect outfit” moments before hopping on the train to meet her, I finally decided on an outfit and had the most magical night ever with the Queen Mermaid herself! We did everything from running past the UN to saying hello to a fancy horse, and more!

Yes, I said a fancy horse. I didn’t stutter.

I was excited not just to meet Helena, but also because – I’m actually quite embarrassed to admit it, but – this was my very first time running in NYC! Yes, I live only 45 minutes away by train, and hang out in the city almost once a month, but I have never once gone for a run in that gorgeous city! 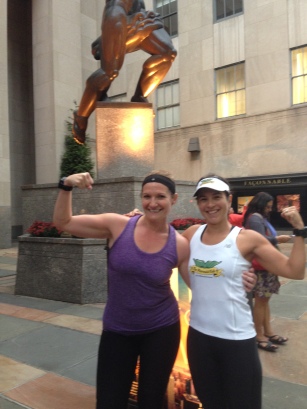 And I’d never done the Gun Show pose underneath an unfortunate angle of the Atlas statue either, so hooray for two milestones in one day!

When we set off from the hotel, I know it sounds cheesy but I could literally feel the pulse of the city as I ran. Weaving in and out of rush hour foot traffic, racing to beat the walk/don’t walk signs, breezing past the UN… and all with this amazing inspirational athlete by my side? Talk about a dream come true. 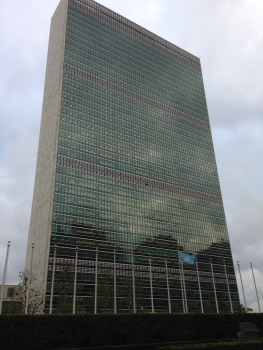 The UN: so shiny…

So we clocked a little over a mile of stopping and starting to get to Central Park, where we took a wrong turn and ended up in the zoo. Which is still magical, but kind of funny because we both had no idea where we were going. 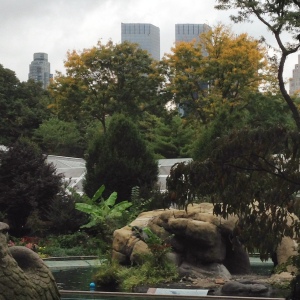 But we did get to see sea lions and the NYC skyline in one shot, which is so stinking cool.

Once we acclimated ourselves I steered us towards the famous fountain. On our way there we almost got plowed by a couple of guys going super hard (it was the first time I’d ever been the recipient of an “ON YOUR RIGHT!”, sorry guys), and we even stumbled upon a full-fledged training run with pacers and bag check and everything – holy crap do those runners know what they’re doing! It made me so jealous of these folks who live right there and can do this every night! 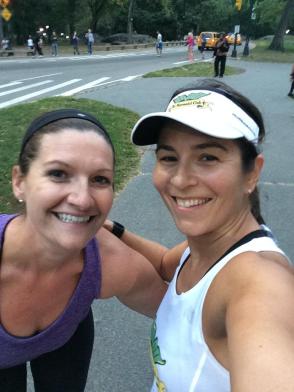 We chugged up and down the famous Central Park hills and chatted about the club, our families, our jobs, running, training – you name it, we covered it. And soon we were at the fountain, jogging and taking pictures and marveling at how gorgeous the place was at twilight. 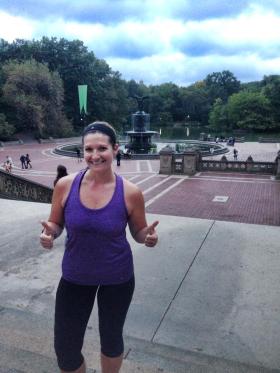 The fountain – not very good to hang around because I was super thirsty at this point.

I wish I could run here every day!

Once we circled around the fountain and through the other side of the park, we realized A) we were more than 3.5 miles from the hotel and still had to go 1.5 miles back and B) we had both forgotten money for water or a cab. So we slowly made our way back to the hotel with a few walking breaks and made it back to the hotel at about 4.5 miles. Then we swapped into some dry gear, headed out to a little pub around the corner, where we devoured vast amounts of delicious food and beer, all while swapping our favorite race stories.

I was so happy to share my stories (and a bunch of hearty laughs too!) with Helena – she’s done so much for my confidence as a blogger and a runner since we “met” online a year ago, and connecting with her in person was really an awesome experience! She really helped me put things into perspective with her awesome outlook, and I’ve found myself adopting her mantra: “coz why not?” So while I was sad to say goodbye, I was excited and re-energized to look at setting some new goals – like, perhaps a sprint triathlon is in my future sooner rather than later? Who knows? Coz why not?!

And after we parted ways, I managed to round out my mileage to an even 5 when I had to sprint the last half mile back to Penn Station to catch my train! Considering we’d aimed for 2-3 miles at most before calling it Beer Time, I’d say that’s not bad for my first run in the city!

Have you ever met a virtual friend in real life and had a great adventure like ours? Tell me about it! I’m always happy to hear about people connecting in a great way. Share the love!