I’ll spoil the surprise for you: this 5K get a big thumbs up!

This race was a lot of fun – I originally hadn’t planned on doing it because of the ridiculous miles I was supposed to be putting in around these weeks. I didn’t want to register then have to drop out when a 20 miler knocked my ass out the day before! But when I re-prioritized and dropped to the half, a whole bunch of great fun run opportunities opened up to me – including this race! A friend of mine works with Make-A-Wish New Jersey, and when she invited me to come out and support a great cause I couldn’t turn her down! So when I woke up on Saturday, September 27th with a head cold and runny nose, I strapped all my gear on and added a package of tissues to the mix and went for it.

How could I not, with a view like this the whole run?!

It was a small-ish race of around 150 folks, starting in the newly refinished Liberty State Park (thanks, Hurricane Sandy). It truly was a gorgeous morning – not a cloud in the sky, warming up to around 70+, not even a breeze. The course was totally flat and led me along the water around Lady Liberty one way, then facing the NYC skyline the opposite way. Perfection!

I took my place near the back of the pack (as usual) with no expectations at all – this was purely a fun run. With all the cold meds in my system I anticipated finishing around 40 minutes, but what the hell. Fun run! An old friend turned out to be running the same race, and we chatted for a bit before the gun went off. Once we started, he took off and I chugged along and fell into step behind a gentleman with a nice backside (hey, I calls ’em like I sees ’em) and realized that he was pushing me to a good 10:30 pace – and I wasn’t even feeling it. Go figure! 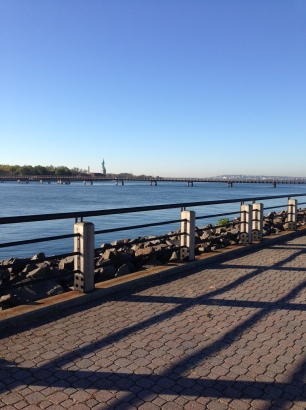 Must have been the nice views on all sides (thanks, Mr. Nice Patootie Pacer)

The course took us about 1.4 miles in one direction before spinning us around and going back the way we came from. That meant that every single person that was faster than me had the distinct pleasure of watching me stop and blow my nose. I’d stop, blow, wipe, tuck my tissues away, and start up again, catch up to Mr. Pacer for a quarter mile, then do it all over again. Those poor folks got more than they bargained for, but hey – at least I wasn’t blowing snot rockets at them.

I made it a point to not look at my time until I had less than a mile to go. So once I hit 2.3, I glanced at my watch and saw somewhere around 30:xx. I was doing a lot better than I had planned! Even with all those runny nose stops, I was still on pace to finish under 40 minutes. Must have been my pacer for the first mile 😉

So I sucked it up (literally) and pushed for the last .75 or so – with one mandatory “stop now or risk a snot-filled finish line photo” pit stop. And wouldn’t you know it, I finished only 10 seconds slower than my last healthy 5k two weeks prior: 36:54!

That’s running happy if I’ve ever seen it!

I was thrilled – even with all those full stops, I was still only 10 seconds slower than my last race. I cursed myself for being sick and wondered just how fast I could have gone if I was healthy! Ah, fun runs. They bring out the competitor in me.

And tissues. My god, so many tissues.

The Walk For Wishes was scheduled to start a bit later, so a good crowd had gathered to get ready and watch the award ceremony. There was even an impromptu dance party (so much fun!) – and the best party? We even got participant ribbons!

This will look so cool with all my medals!

After the excitement died down and the walk started, leaving the park pretty empty, I called it a day so that I could retire to the couch with my tissue box and blankie.

Overall it was a fantastic race and I can’t wait to return next year. Great job, Make-A-Wish NJ!

There was an error retrieving images from Instagram. An attempt will be remade in a few minutes.