I know I kind of did this backwards, but I had such a great time at the United NYC Half Marathon Expo and Instameet that I just had to backtrack and tell you about it today!

I had planned on going in to the expo to get my bib and do some shopping on the Saturday before the race, but when I got the invite to a special “Instagram-friends of NYRR” type party at the Expo that Thursday, I changed my plans! After a quick train ride into the city, I simply walked across the street from Penn Station and voila: I was at the expo!

After breezing through packet pickup and grabbing my number, it was on to the fun part: shopping!

The inside was poorly lit, but aside from that, it was one of the best-run, easiest to navigate, and useful expos I’ve ever been to! I stocked up on my favorite Gu flavors (and saved myself a trip to Road Runner in an already crazy week!), picked up a super cute Sweaty Band with the race’s colors and name on it, and some other fun goodies like race-branded ear warmers, a hat, and a mug too!

Coffee just tastes better in a United NYC Half mug

So after a bit of shopping, it was time to join my fellow Instagram people at the Tata Consultancy Services Lounge for the first half of our Instameet, which included the cutest little cupcakes: 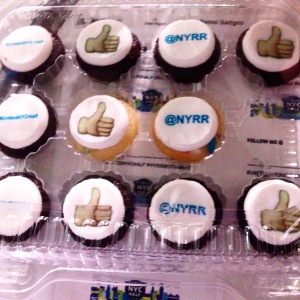 And an awesome photo op with some Instagram “celebrities” that I’ve been following and chatting with for months now, and finally got to meet in person!

The best part about this photo was trying to decide if we should make the letters with our bodies or just use signs.

After mingling for a bit, some of the partiers decided to call it a night, but the rest of us hoofed it a few blocks away for drinks and food at Tir Na Nog on 39th, courtesy of the awesome folks at NYRR. It was exactly what we all needed: with race day just a few days away, we weren’t so much people as we were just bundles of nerves held together by KT Tape and Asics.

And Heineken and Cabernet.

I don’t think I can ever thank the folks at NYRR enough for inviting me to this party and bringing us all together. You know how those last few pre-race weeks go: our loved ones and coworkers can only take so much of our insanity during taper time, so being able to talk about running and mingle with a bunch of like-minded people who are also going through the same race prep as you was a huge relief.

It was also a great place to make some new friends, too! That Heineken up there belongs to one of those new friends: Bolivar. He introduced me to something called “Little Friday” (aka, Thursday), a tradition that I am only too happy to incorporate into my future stress-relief plans!

At the end of the night we toasted one last time to a good race on Sunday, I finished my second glass of Cabernet, and sauntered the 4 or 5 blocks back to the train station just in time for the 9:38 train back home! I smiled pretty much the entire ride back, and spent most of the trip connecting to all of my new Instagram friends and trading likes and comments and well wishes. 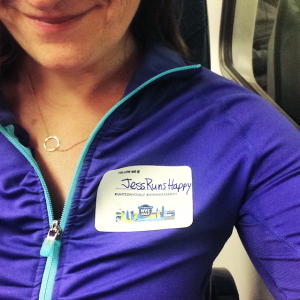 It was just what I needed to relax before a race as big as the NYC Half – and I have the great people at NYRR to thank for it!