I know what you’re thinking: three posts in one week? Who is this chick and what did she do with the old, lazy blogger Jess? Well, let’s just say I’ve had too much coffee and not enough breakfast this morning, so my new-found abundance of energy means you get a bonus post this week. So because I haven’t done one in a while, let’s check out some Friday Favorites: Too Much Coffee Edition!

Never before has a TV show (or movie, for that matter) made me DESPISE characters so much, yet compelled me to keep watching like House of Cards. There were even times after certain events involving Corey Stoll’s character and poor Rachel, where I had to take a break from watching for a few weeks because I was so gutted. I hated these people for what they did, and couldn’t imagine ever caring enough about them to watch the show again. Yet, like a moth to a flame I kept coming back. Hate watching? Maybe. All I know is that Season 4 is officially out as of this morning and I’m REALLY looking forward to binging as much as I can this weekend.

Guys. You guys. Linda, honey, just listen. I know I’m a geek for loving on Star Wars, but I don’t CARE anymore. At first I tried to play it off: no, I’ve had this Death Star blueprint shirt for a while, just never wore it. Yeah, I figured I’d get a Kylo Ren blanket cause the cats really like that soft smushy material and it was on sale.

Rey practicing the snow fight? Adam Driver interviews? A BB-8 puppet in action?? KYLO REN ON THE FALCON, YOU GUYS?! I have no more chill. 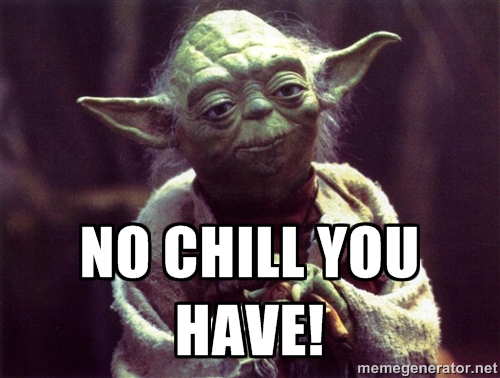 See what I did there?

I can no longer hide it. When they announced the home video release date of the Force Awakens yesterday along with the DVD trailer up there, all hope for a normal future was lost. I’ve officially blocked off my calendar from April 1-15 for an extended two-week geek out while I watch all the deleted scenes, making-of documentaries, and memorize every single scene. I’m so excited, and I just can’t hide it. I’m about to binge-watch Star Wars til my eyes bleed and I think I like it. 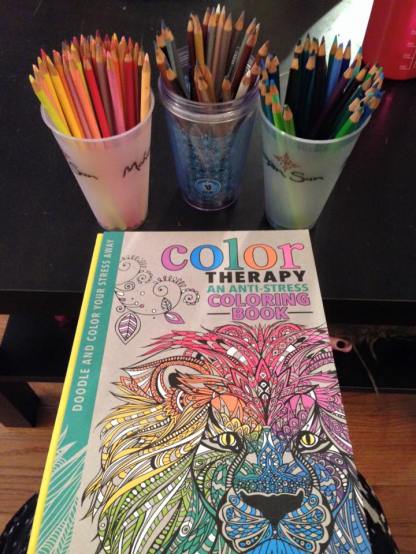 They had me at “anti-stress”.

Back in college my parents would send me little care packages every few months. One time my mom decided to throw in a dollar store coloring book and a pack of crayons as a joke “for stress relief”. Well, I colored the HELL out of that thing. And I even mailed home a few pages for them to put on the fridge, because I evidently never emotionally matured past the age of 9.

I like to think that my mom was the firestarter of the adult coloring book trend (not to be confused with adult coloring books, ya perv). They’re billed as stress release, anti-tension, mind calming things, and I’m here to tell you: it’s true. All of it. (see what I did there again? GOD I’m on a roll!)

Every few nights I take out my pencils and one of my coloring books (yes I have 3), pick a page and get lost. Bonus: I’ve been trying to get better about how much time I spend on my phone in the evenings, and this is a major aid there. Plus my hands are too busy coloring to snack too! Extra bonus!

I’ll color you a page and post it here for you to hang on your fridge if you want. You know. For decoration.

That’s about it for my Friday Favorites – I’ve had a good 24 oz. of water while typing and the caffeine is starting to wear off. So now it’s your turn: Have you ever gotten emotionally involved with a TV show? What do you secretly geek out over (and if it’s Star Wars, can we be best friends)? Want to color with me?? Bring your own pencils and we’ve got a date.

8 thoughts on “Friday Favorites: Too Much Coffee Edition”