At the end of May, one of my coworkers passed along an email about a Corporate Fun Run in Mercer County Park with the following subject line: “Would you be interested if we can get a team for this?” A 5K with my coworkers at the beautiful park near our office? Of COURSE I was interested!

So over the next few weeks we recruited a total of 11 people, ordered tech tees with our company logo (and persuaded our boss to sponsor our registration fees, thanks Josh!), and with that, Team IG was ready to run.

On race day, the weather was typical for mid-June: overcast with some sun, muggy, and kinda gross. We all showed up at the park with time to spare, and after I picked up our bibs as Team Captain and handed them off to everyone, we goofed around and got psyched up while we waited to start. 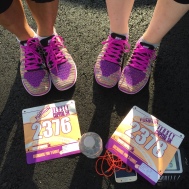 The whole thing was a fundraiser for Tackle Kids Cancer, a really great organization here in NJ at the Children’s Cancer Institute at Hackensack University Medical Center that’s committed to advancing research and providing children access to the highest level of care, and we were psyched to be able to raise more than $400 for them!

As we toed the start, we realized the race was smaller than we thought – there were only 65 runners total! Plus, a handful of my coworkers were running this as their FIRST 5K (what’s up, Rani & Sathya! So proud of you!!). My friend and running buddy Alex said she wanted to keep pace with me – she’s usually faster than me but had been sick that week and just wanted to have a good time, so we stuck together most of the way.

At the horn we took off over the mat, we got caught up in the excitement of watching our SUPER speedy coworkers take off at the front of the pack (and screamed our heads off at them across the pond when we saw them take the lead ahead of us)! Soon we fell into a good rhythm and chatted, even snapping Alex’s first ever GoPro Runfie!

We soon realized that this was no ordinary 5K. Even though the course was billed as an out and back, we didn’t see anyone coming back until just before the turnaround at mile 1.8. And yes, for those of you playing along at home, the turnaround for a 3.1 mile, out-and-back course should NOT be at mile 1.8! But we screamed our heads off when we DID see people coming in the other direction – because they were ALL of our coworkers! One after another, we screamed and high-fived the speedy folks that took the lead, then stopped at the water station turnaround for water and a walk break.

Up til then I’d kept our pace at a semi-uncomfortable 11:45-11:50 – with the humidity, we had tossed the idea of PR’ing out the window. The humidity was a beast – even though we were running in shady forest, it was hard to breathe. Just before the “2 Mile” marker on the ground at mile 2.5 (LIES!), Alex told me to go ahead without her so I took off.

I started picking people off one by one. One woman kept pace with me that whole final mile, stopping to walk after she passed me, then running again when I passed her. When I knew the finish wasn’t too far away, I chose her as my “no way” target: NO WAY I was letting her pass and finish before me. So I took off over a little bridge and around the park – it was so awesome to see all my coworkers who finished before me crowd together at the finish line and cheer me over the line at just over 40 minutes!

Not long after, Alex finished, and we hung out to cheer on the rest of our teammates as they finished too (while enjoying some post-race beer). 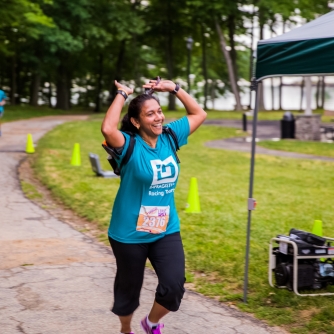 It was a great vibe where everyone cheered each other on, and even the race director stuck around at the finish to apologize to everyone for the course being so long. I was stoked to hear all about how everyone else did, especially when I discovered that one of our guys WON THE RACE! 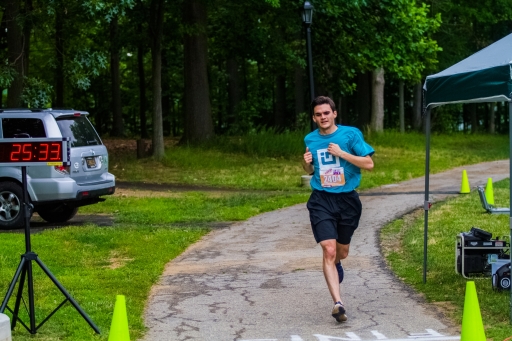 Seriously, he WON the thing in just over 25 minutes (or according to him, 4 “Hotel California”s) and snagged the First Place Male Overall award! But that’s not all – we all finished we hung out to wait for the awards, and we were blown away when we realized just how well we did: 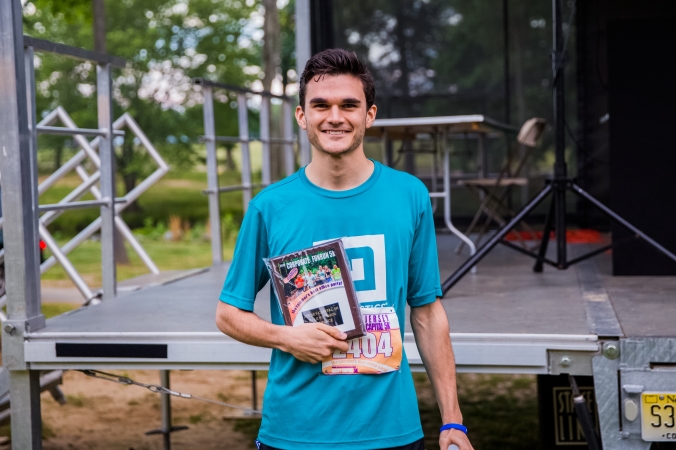 3rd Place Largest Team AND 2nd Place Team Spirit Award (for live-posting on Twitter and Instagram before and during the race!)

You guys, I finally won an award! I was on the team with the top 3 females, and I was NUMBER 3 IN THAT TEAM! I’m not kidding: I cried a little bit. I had to suck it up so I didn’t cry in front of my coworkers, but seriously, look at that crazy face up there. Those are some full-on Crazy Eyes, and I wasn’t about to let that award go.

5 years of running and I finally got an award!

As it turns out, I actually finished as the 9th Female Overall (which is ludicrous!) but proves that this race was purely a numbers game: the fact that there were many more speedy guys ahead of me – and a lack of female runners out for blood – meant the odds were stacked pretty high in my favor. But I’m not complaining, I’m too busy finding the perfect spot for my very first running award!

Fun tidbit: after we’d gotten our awards and were hanging out eating and celebrating at the post-race party, my NO WAY target (who was an extremely fit, serious-looking chick!) came up to me and congratulated me: “Nice work, thanks for helping me push the pace, I was trying to get ahead of you there. You still beat me though.” I was dumbstruck. Normally I’m the one saying “you beat me”. I thanked HER and she moved on, but I had to laugh: I finally nailed a No Way Target and she knew it.

Overall this was a great race, as far as evening races in 90% humidity on a long course go. The fact that we did it as a group made it even more fun though, and I would happily do it all again. Once word got around our office after we returned victorious, the murmurs about running it again next year have already started. And with any luck, I’ll be there to defend my title!