I’ll admit: I had no intentions of participating in the One More Tri triathlon this year. After a pretty miserable experience last year (almost entirely of my OWN doing, mind you), I wrote off the sport of triathlon as a fun distraction from my usual running and that was that. But when Jeanene Leppert, the Special Events Director of Special Olympics New Jersey, reached out to tell me about the positive changes they’d made to the race and invited me to this year’s event, how could I say no? 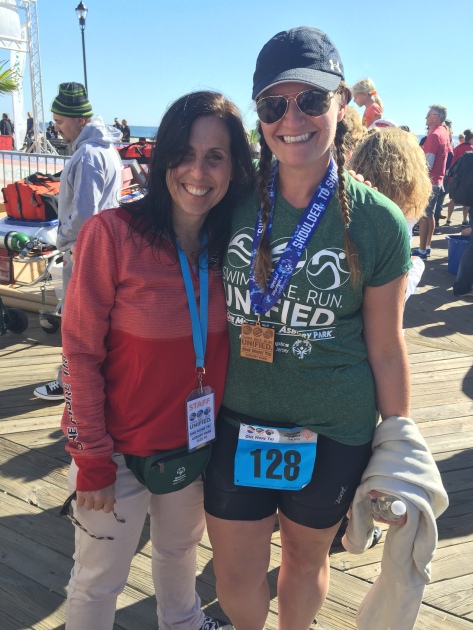 There’s Jeanene: one of the sweetest, most hard working women I know!

To keep things low-key, I registered for the Super Sprint distance; knowing I’d be smack in the middle of half marathon training, I didn’t want to push too hard and this .1 mile swim, 6 mile bike, and 1.5 mile run was just the right effort. It worked out even better because I ran a solid 11+ miles the day before, my longest run since May, and I was tired! 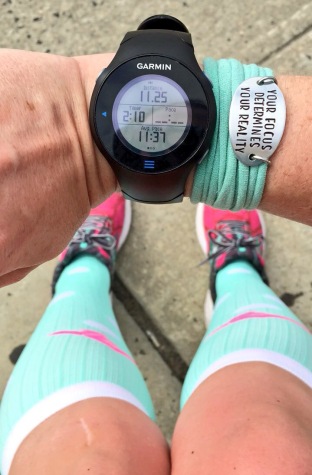 On Sunday morning I packed up the bike and headed down to Asbury with Mike, arriving with plenty of time to check in, get my packet (and a BIG hug from Jeanene!), set up in transition, and go wait in the car while the temps rose from a chilly 49 degrees!!

Once the sun came up it got warmer, and we made our way to the boardwalk for race announcements, the national anthem and the reciting of the Special Olympics motto: “Let me win. But if I cannot win, let me be brave in the attempt.” And that’s when I was reminded why I was SO happy to do this event again: being able to compete alongside Special Olympics athletes is a true honor. No matter how rough the water is, how strong the winds are, and how hard it is to keep running on tired legs, the fact that I get to take on all these challenges with these inspirational folks by my side is one that I will never not be moved by.

As we marched to the beach for our swim start, we were informed that the swim portion had been shortened for everyone due to the rocky surf. Seeing the crazy waves the day before during my long run I figured as much, and we all clustered on the sand to keep warm after shedding our layers. It wasn’t long before our wave – the last wave, of course! – was next, and I laughed with some of my fellow Super Sprinters as we calmed each other’s nerves and passed the time. One woman had us roaring about how we should just “go to Waffle House – we’ve got the shirts already!” 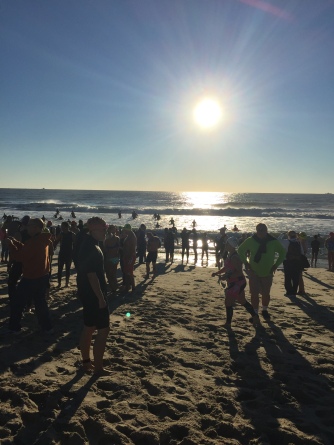 After just a few more minutes, our gun went off and we ran into the water (which was almost 20 degrees warmer than the air!) and quickly discovered that the “swim” turned out to be a “fight for 35M through the waves and walk to the lifeguard who keeps getting knocked over”. 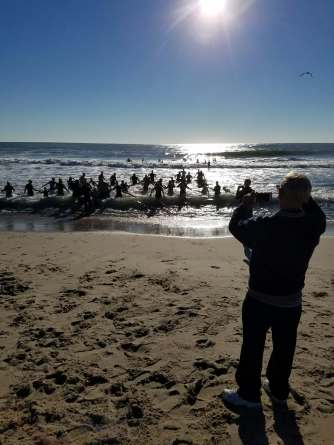 It was BRUTAL! I’ve never felt the surge pull me back so strongly – once one wave crashed over us, the current pulled my legs from under me and I had to fight to stay upright. After a few minutes of walking through the waves – and laughing and screaming – we made it to about 5 feet from the lifeguard. While the goal was to go around him, it was like running into a brick wall when each new wave pounded us! I laughed the whole time, and finally when a wave pushed me out, I grabbed onto the lifeguard’s shoulder to keep from getting swept out, rounded him and promptly got swept right up onto the shoulders of the guy in front of me, who got pushed into the girl in front of him, and so on! After apologizing and laughing, (“Thanks for the ride!”), the water calmed down enough for us to make a break for the shore again, and I ran. It was TOUGH. My legs burned from running against the strong current & jumping over waves, but I finally made it out.

The run back from the water to T1 was long – I’d estimate about a quarter of a mile or so, mostly on sand – but when the course is lined with volunteers and spectators cheering you on it’s hard NOT to feel awesome. Once I got into transition I rinsed my feet off, tossed my sneakers on & ran out with my bike. The volunteers were super organized, pointing me in the right direction with clear instructions and lots of encouragement, and I jumped on the bike in no time, speeding off for one loop of 6 miles.

There was a headwind for the first 3 miles out, but the course was clearly marked and filled with volunteers pointing us in the right direction (and police blocking traffic for us, thanks guys!). As I turned back at mile 3 and took a gel, I couldn’t help but smile and notice the absence of blue bibs around me. There weren’t that many folks in the Super Sprint wave at the swim, I wonder if I could Age Group place?? That was enough to make me pick up my pace and push for a bike finish of 26:10.

After Mike snapped me bringing my bike in, I tossed my helmet off and headed onto the boardwalk for the 1.5 mile run, going slowly. My legs were now pretty shredded from the ocean, sand, and bike, but as I made it to the boards I fell into a rhythm and kept pace at a surprisingly fast 10:30. I’m just always faster when I bike!

It was on the boardwalk that I realized just how good my chances were to place – I saw only a few other blue bibs around me, and none were in my age group. The volunteers on the run course were phenomenal – SO many more this year than last year, and their enthusiasm was contagious. Once I got to the turnaround ahead of the full distance folks and headed back for the finish, I picked up the pace and couldn’t stop smiling over what a completely different, positive experience I had this year compared to last year!. When I spotted the folks at the finish line I broke into a sprint and crossed in 15:23 (a 10:15/mile pace!) and a total time of 51:41. 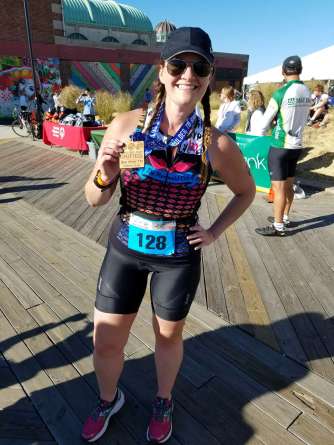 And of course I burst into happy tears when the little 5 or 6 year old Special Olympics rep placed my medal around my neck and gave me a high five, because that’s what I do.

After finding Mike and celebrating with him on a great finish, we wandered to the food tent where they had a CRAZY spread of amazing food – sandwiches, muffins, kale salads, Girl Scout cookies, donuts, recovery shakes, iced tea… you name it, you got it! 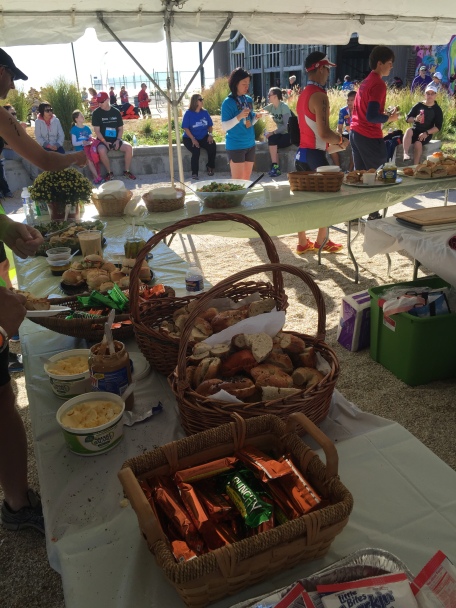 After eating and sitting for a bit, we hung around for the awards and cheered on as the winners were announced in all divisions. It was so fun seeing everyone get recognition for their hard work. But the biggest shock of all came when they announced the Top Three Super Sprint Female Winners – and I placed THIRD OVERALL! 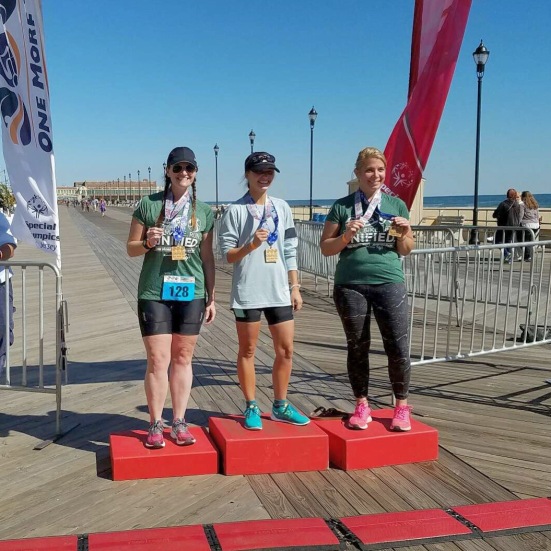 Seriously, you could have knocked me over with a feather. Standing nearby helping organize medals and presenters, Jeanene screamed and grabbed me for a huge hug when she heard my name, and I went up to the podium for my first ever Overall medal!

I was so stoked – sure, it’s really a numbers game when the field of participants is that small, but I still came in 11th overall in the Super Sprint, and 2nd in my AG too! I’ll take it!

Needless to say, this race is now a Must-Do for me every year. The Super Sprint distance the perfect way to challenge myself while not interfering with my half marathon training, and I can definitely see myself doing this one again next year – maybe I’ll see you too? 😉