When we last left off on Day 2, I’d had a ridiculously fun-filled day with the Runner’s World crew and my fellow ambassadors, and was prepping to run the Five & Dime. 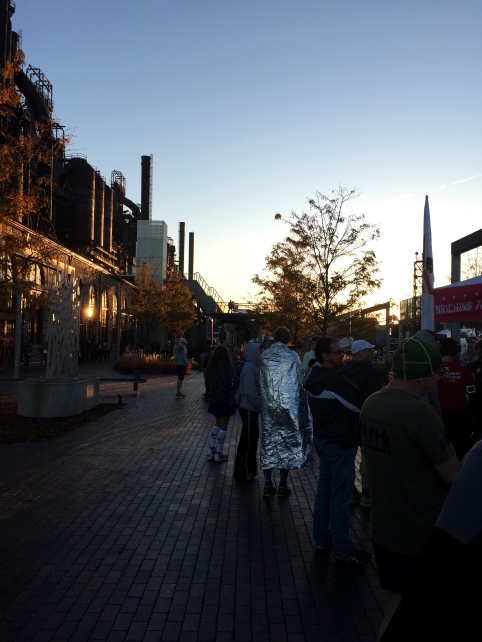 At about 7AM (thanks, 8AM start time!) Ryan, Amy and I met up with some other folks in the lobby and headed to the start about a mile away. It was brisk out there; 33 to be exact. I had opted to check a bag with clothes to change into, but my dumb ass didn’t actually pack a jacket, so I chattered my way there in one long sleeved layer, easily checked my bag, and we hung out in the corrals for a bit. 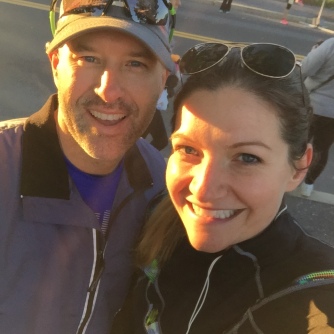 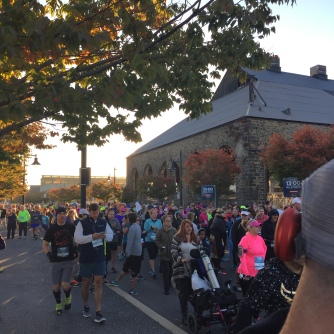 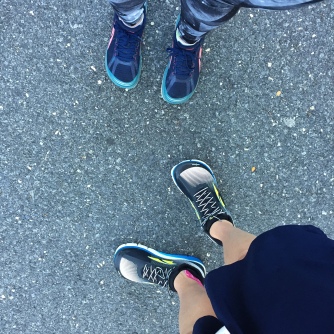 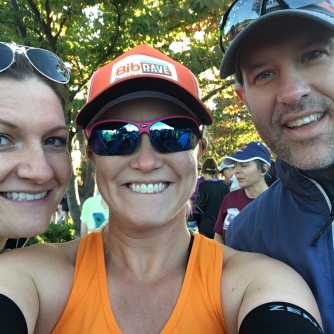 I was so excited – I even ran into my Fifth Avenue Mile buddy, Arun! 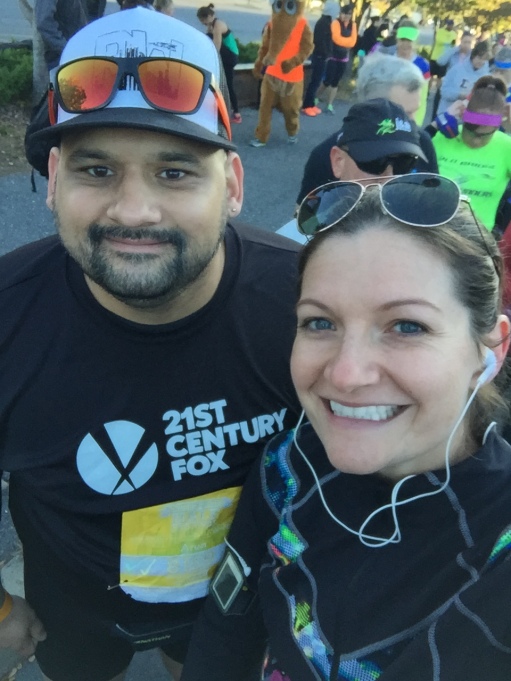 He rocked the Grand Slam like a boss (congrats again, you magnificent bastard!)

As the gun went off we shuffled our way through the chute and up the first little hill to start the 5K. Given my foot issues in the past week, I planned on treating the 5K as an easy warm up, and even kept my phone out so I could snap pictures of the scenery I’d heard so much about. 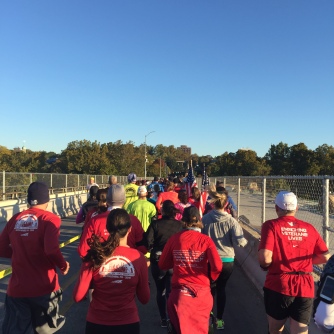 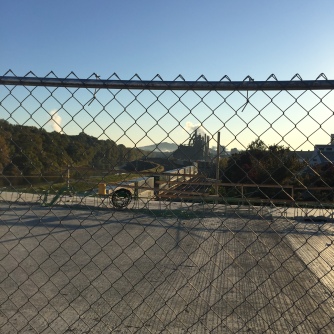 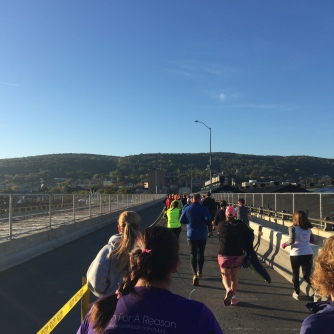 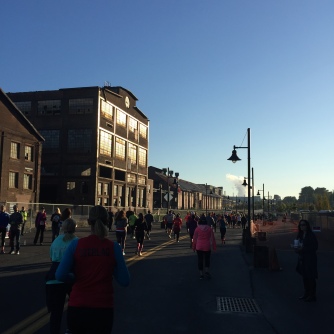 Admittedly, photos of the scenery don’t do it justice – especially the pictures from the run over the bridge. The only negative thing about the race I will admit to is the construction happening on the bridge: the huge crowd of middle-to-back-of-the-packers could only fit so well in the half lane we had to share with the returning faster runners and around the first half mile we came to a full stop. I’ve never had that happen in a race before. But whatever, I wasn’t going for time here! 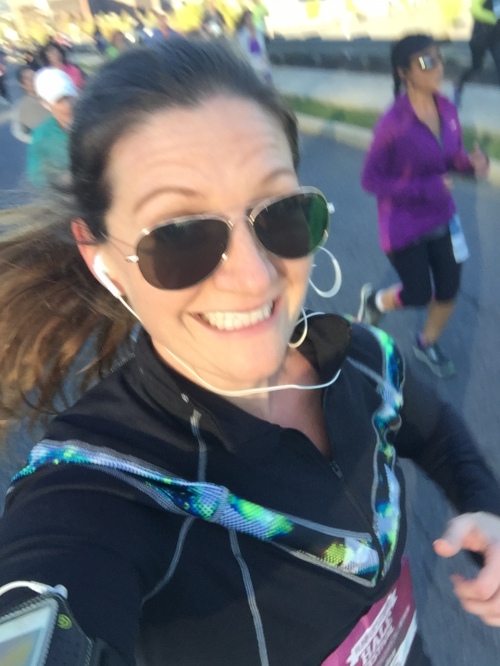 super serious runner, extremely angry about having to stop for 3 seconds during a race

The course was quick, kind of hilly, and there was a surprisingly good amount of folks out there cheering us on so early in the freezing cold! By the time I got to 2.5 I snapped a few more pics, made a beeline for the finish, and crossed in 36 & change. 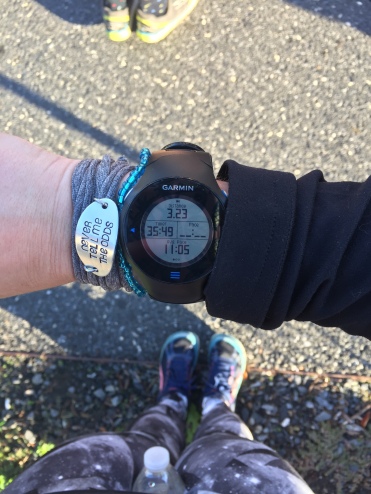 With a bit of time between races, I ran back to my bag and dropped off my medal and some finish chute goodies (hello Veggie Straws and Godiva Chocolate bars!), circled back to the start area for the 10K, met up with Ryan again, and then we were off!

I put my phone away for this run so I don’t have any scenery shots, but the professional race photos were FREE (!!) so I have lots of those to show off. 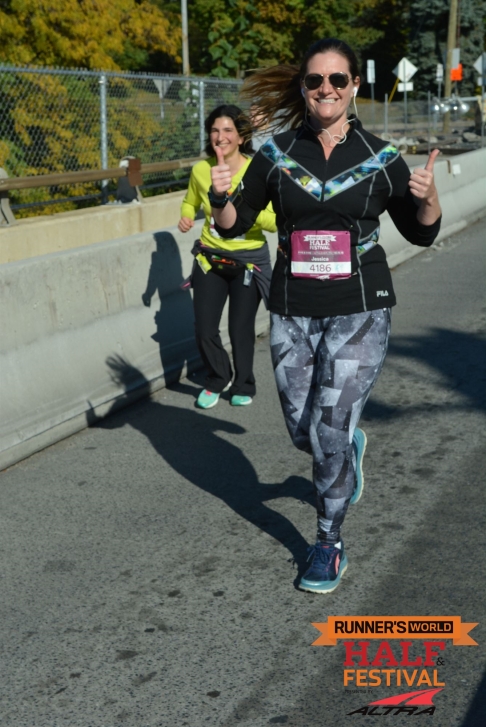 thumbs up for free race pics!

I felt good through the 5K mark and realized that I was pushing a pretty fast pace with absolutely no pain. I walked through some of the more challenging hills at mile 4, got a high five from a dude dressed as Jesus outside a church (and I’m pretty sure that was a real nun sprinkling holy water on us too, so there’s that), and took a gel at around the 5 mile mark. As we went back up over the bridge we ran in the 5K for the same final 1.5-ish miles, I realized it was mostly downhill from that point on, and I could potentially PR. 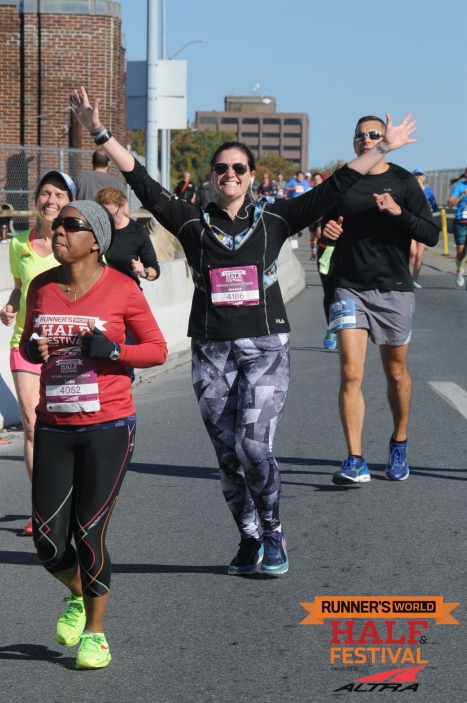 So I sucked it up and started passing people left and right in the final mile, run-dancing a bit when 24K Magic came on, and before I knew it I was crossing the finish line at 1:11:19, setting a 2+ minute PR! 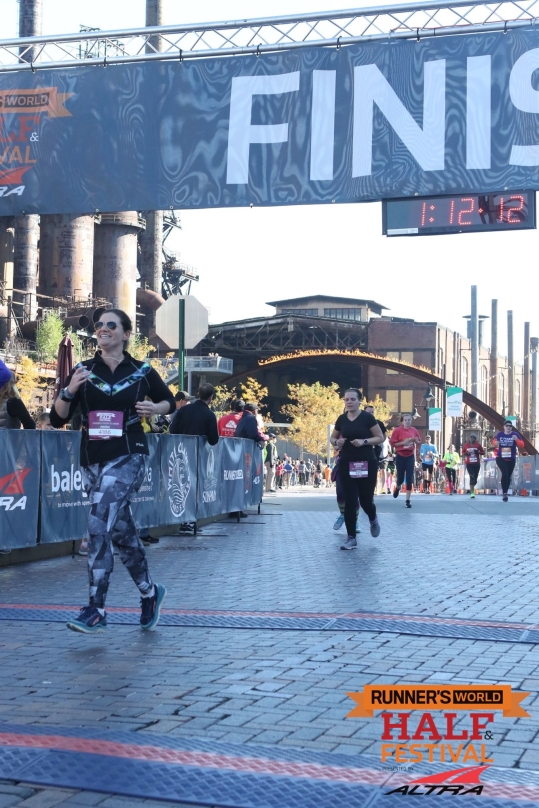 When I looked down at my watch as they handed me my second medal of the day, I felt a happy tear or two well up – coming off of such a disastrous race in Brooklyn the weekend before, this was just the performance I needed. 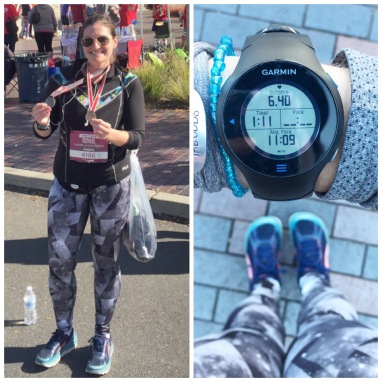 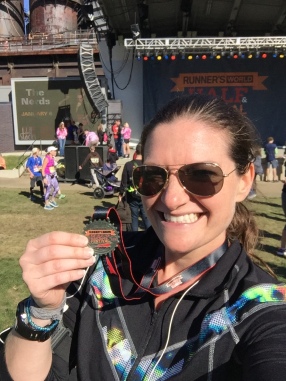 Needless to say, I floated on cloud 9 for the rest of the day. On the way back to the hotel, I grabbed a slice of cheesesteak pizza and a salad for my victory lap, and managed to get in a solid nap before our Pasta Dinner with the Runners World Editors and other runners. 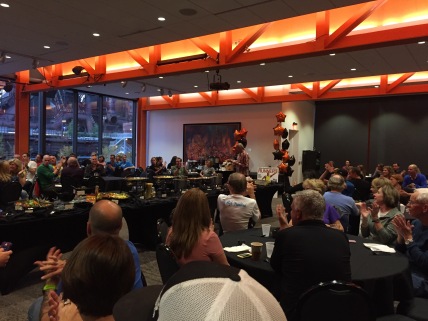 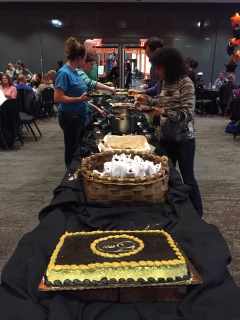 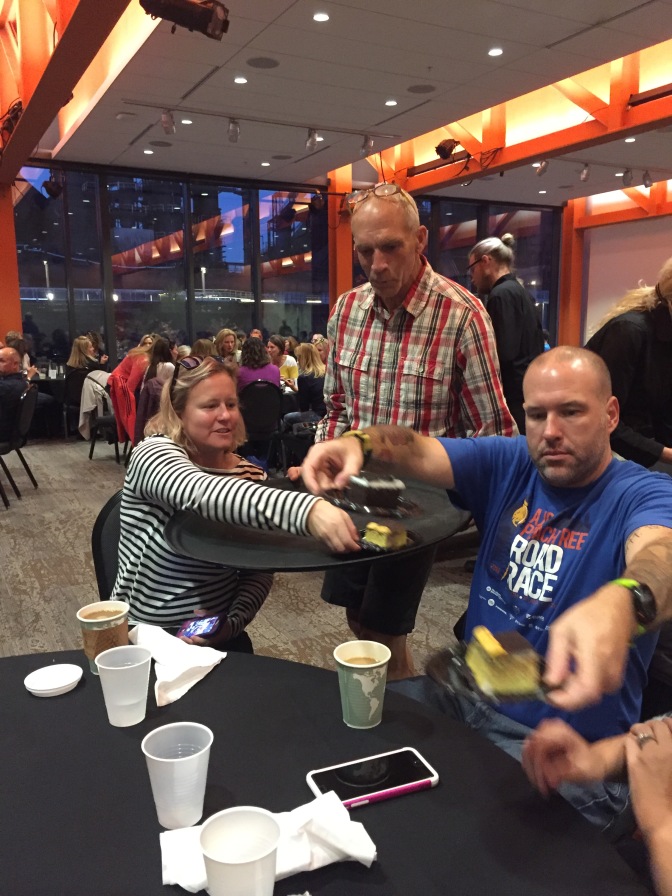 Bart even played host and got us our cake!!

It was a great dinner – there was even a marriage proposal at the table next to us! What a time to be alive. David Willey, Bart Yasso, and Brogan Graham all said a few words – and sang Happy Birthday to Runner’s World!

Apologies in advance for the shaky camera and profanity.

After dinner we headed back to the hotel, but not before taking some awesome pics at the little red carpet setup they had outside the dinner: 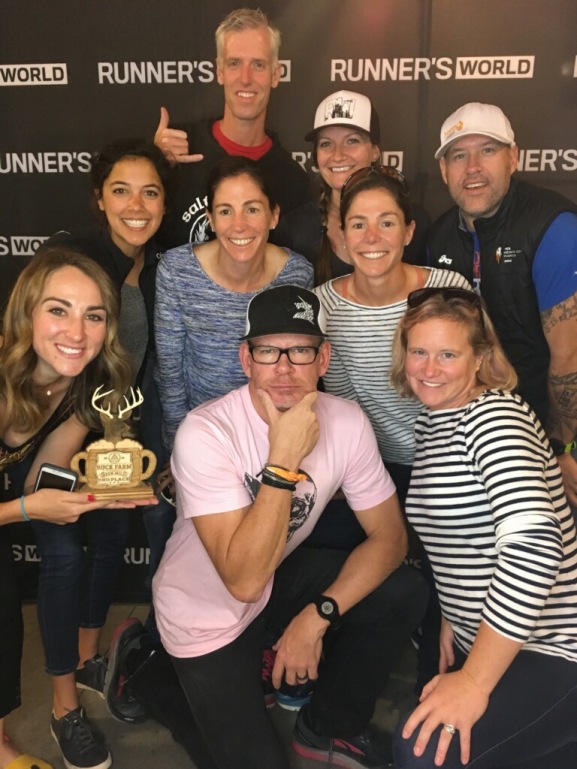 The best part about taking photos with so many people is the abundance of angles and cameras – one person even had the iPhone that takes video pics (how Harry Potter/living photograph!!) so we get gems like this:

With the paparazzi appeased and our bellies full, we got back to the hotel just in time for the hotel bar band to start up. While some more responsible folks opted to turn in for an early bedtime because they were racing the next day, I hung out with the stragglers, listened to the band, talked shop, and had a glass of wine to celebrate my PR and unwind. I was a bit sad to think that my weekend was basically over, save for the cheering on at the half marathon I planned on doing the next day! But the next day was just as great as the rest of the weekend – stay tuned for the final day recap, coming soon!