In case you missed it, I kicked off a new series on the blog last week called The Jess Runs Happy Marathon Training Movie Reviews. In this series, I review the movies that I watched on the treadmill while I trained for the 2017 NYC Marathon, through the very specific and slightly skewed lens of a marathon runner; i.e. judging based on the number of miles each film helped me run and whether or not I cried while watching it. In addition to other movies like Moana, Paterson, While We’re Young, The Matrix, and Blade Runner, I watched the film I’m continuing the series with today:

As a Star Wars fan, this one was a no-brainer: it has General Hux AND Poe Dameron! 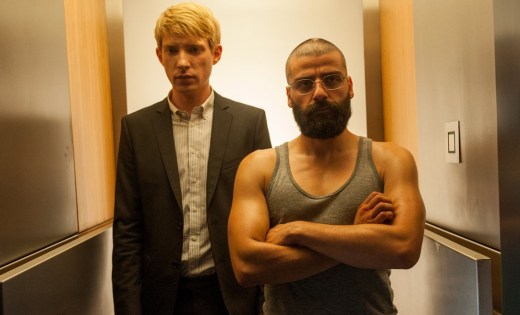 sure, they look a little different, but space does weird things to a body…

In short: Bro-genius Nathan (Oscar Isaac) has invited schmoopy Caleb (Domhnall Gleeson) to his underground laaaairrrr to perform the Turing Test on Alicia Vikander plays Ava, a slinky android. And, as is to be expected when you lock two supremely smart men in a labyrinth of underground halls filled with technology and *spoiler alert* evil robots, it takes a pretty hard left.

But not before we get treated to what is possibly the most mesmerizing, oddball, and perfect piece of dance in 21st century cinema: 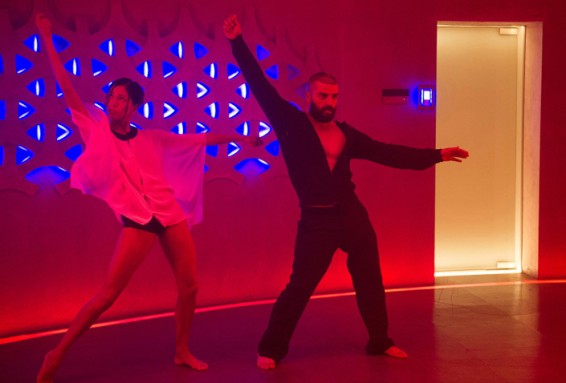 The absurdly deep V-neck. The drunken swagger. The use of the best Oliver Cheatham song ever. Move over, Citizen Kane. Poe mother*ckin Dameron is here and he’s gonna tear up the dancefloor.

Enough about the silly dance scene, you’re probably saying; how did it fare as a marathon training movie?

Distance: Right off the bat, this one gets an A+. With a runtime of 1 hour 50 minutes, I started this one at the beginning of a post-work 8-miler and expected to lose interest or call it at the 60 minute mark when I had to restart the treadmill. But I was so absolutely enthralled by this movie that I not only blew through it, but managed to finish my run just as it ended, all in one night, with only a few walk breaks. Near perfect.

Sob Factor: No tears. But in this case, I’m going to say that means it gets an A.

Inspiration Meter: There’s no real action to speak of, but Alicia Vikander and the rest of the androids are f*cking flawless, and both the male leads each had their own specific appeal. A+ for eye candy alone, #sorrynotsorry.

Overall Score: Let me set the scene for you so you can understand why this movie is getting the rating it is:

It’s near 8:30PM on a Tuesday. It’s dark out, you’re just finishing a 95 minute run in your office gym and there’s no one in the parking lot. You’re entirely alone. The building is very modern, lots of automatic lights and glass and marble – much like the set in the film about murderous robots you just watched. You leave the gym exhausted and sweaty, and walk into the empty hallway to get to the other side of the building where your car is parked. As the gym door closes behind you, a motion-activated light on the far side of the building flicks on, too far to have picked you up. “Hello?” you call. No answer. Slightly spooked, you take a slightly different route down a parallel hallway. You feel your pace quicken slightly as your heart starts to pound. Just as you’re about to get to the exit, a shadow on your left jumps out at you and you scream – before you realize that it’s your own god damn shadow, the god damn glass door is just half open, god dammit. You REALLY shouldn’t be watching scary movies alone.

A+. Have watched again. And again and again.

While running, I saw a cardinal, accidentally interrupted a game of hide and seek, and made friends with a 6-year old named Victor. #todaywasagoodday
About 4 miles of fresh air on my favorite trails this morning 👊🏻 feeling a spark of cautious optimism about the future, thanks to the makers of my running sneakers and my new anti-depressant 👟💊
My shirt says ‘I don’t sweat, I sparkle’, but based on this photo, 4 miles makes me do both 💦✨
The Apple Watch is helpful for reminding myself that I actually did accomplish something when I feel like I’m going nowhere fast 🐢81.1 miles in March and I’m excited to see what I can do in April! 🙌🏻
re-entry into society is going great guys
getting that vitamin d - and that new patio furniture cost per use down 🌞🥶
Knocked out a few @onepeloton miles to end my weekend at 11:17 pace 💪🏻 I may not post about it as often but I’m still out here every day, running and grinding, avoiding the virus (and gluten), and being the best cat mom I can be. How’s it going by you?
in this house we:
Mental Health Day: I got an empty bladder and a fanny pack full of hand sanitizer and snacks, the world is my oyster ✨