Spoiler Alert: I ran the NJ Half Marathon on Sunday, and I PR’d by 15 minutes!!It was honestly the best half I’ve ever run, even in pouring rain and chilly temperatures. Let’s jump right in!

The weekend of the race was crazy busy: my dad’s birthday Friday, my friend Tina’s bridal shower Saturday, and race day Sunday. To keep myself sane, I took off on Friday and headed down to the expo to get my bib (and Tina’s bib too, she was racing despite having her shower the day before!). 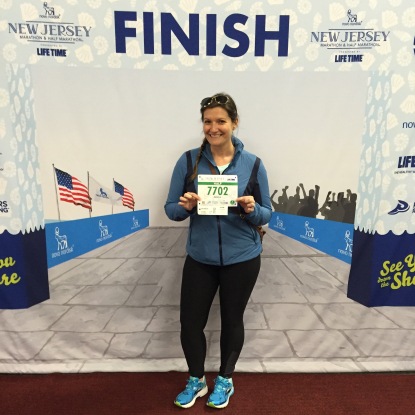 I’m used to expos being insanity, but at 2PM on a Friday, it was perfect. The process was a little disjointed: walk to a table for your bib, then another table for shirts, and another table for pre-paid parking tickets. But because it was so empty I can’t really complain, I didn’t wait more than 5 minutes at each area, and was able to relax, meet the pace team, and talk shop with other runners with no pressure.

The following day I went to Tina’s shower, came home, cooked myself my new pre-race go-to dinner of grilled chicken and pasta in light tomato sauce. After laying out my outfit & relaxing with some coloring and a Melissa McCarthy movie, I headed to bed at 9PM. 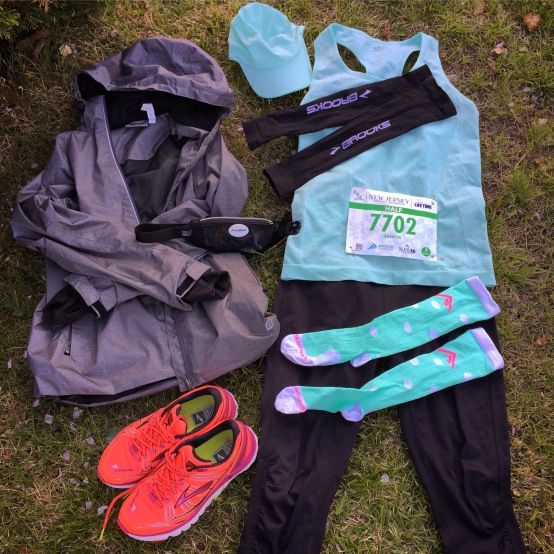 My eyes opened up at 3:27 entirely on their own before my 3:30 alarm, and I was ready to go. One cup of coffee, one banana, and two pieces of bread with a bit of peanut butter later, we headed out at 4:45. The race morning weather reports didn’t look promising: much like the Atlantic City April Fool’s 11K, the forecast called for rain, the only question being how much. After picking up Tina and heading to the start at Monmouth Racetrack, I was grateful we had a warm building to hang out in (even if they closed all bathrooms but one, leaving a HUGE line). There we met up with Meredith who had decided to race as well, and the runner girls hung out while the guys hung back and caught up on their own 🙂

We waited on line for the bathroom to kill time, but by the time we got to the door a half hour later we had to go again! This worked out great though – we got out at 7:20, leaving us just enough time to head out into the cold mist and into the corrals where I almost let my nerves get the best of me. I had talked up this race to anyone who would listen to me, and I set a big goal for myself by publicly aiming for a new PR. The cold and the rain made me start to doubt myself, even with all the extra training I’d done.

“You are looking into the eyes of a woman who wants to run.” Run back to the car where it’s warm and dry and she doesn’t have to run 13 miles.

It’s funny how karma works though, because right before getting behind the gate and being left along with my frayed nerves, my local running friend Tracy spotted me and gave me the best good luck hug ever! She was such a trooper coming out in the pouring rain to cheer us on – it meant a lot to see her, especially just when I was getting so nervous!

Back in Corral J (as usual, near the end), I spotted pacers for a 12:45 half marathon and a 12:24 full marathon. Initially I’d planned on going with the 12:45 pacer for the first 10 miles and saving myself for a final 5K kick, but having never run with a pacer before I was afraid that if I lost them at a water stop or fuel break, I’d never catch back up. So I decided at the last minute instead to run by feel at around 12:00-12:30 just like I’d done in training, and if I had to pick up the 12:45 pacer towards the end, they’d be there.

After a quick selfie, a good luck hug and kiss from Mike, and 17 minutes of waiting while the faster corrals took off, Corral J hit the start and we were off! The mist turned into a light rain as we rounded the parking lot and went up a slight hill to enter the little towns we’d be running most of the course through.

For the majority of the race I took in the crowds of runners around me and got all the high fives I could from the spectators. Seriously – every other house had some kind of race action going on. My friend Dan (above)  was cheering on his girlfriend Michelle and gave me the strongest high five EVER at around mile 5.5! Other folks brought out their lawn furniture and umbrellas to sit and cheer, while others set up tables filled with water bottles or orange slices.

Even though they had official aid stations every 1.5 miles or so (which I grabbed water from without stopping every time), my rain-proof layer had me overheating and I felt paste-mouth creeping up after my mile 5 gel. As if on cue, we passed a house who had left a case of 36 water bottles on their front lawn. The best! I grabbed a bottle and it became my good luck charm until mile 12.

I’m glad I got a picture with my lucky bottle 🙂

At the halfway point, I still felt good but had a brief flash of anxiety: “I have to repeat what I’ve already done? There’s no way I’m going to feel this good much longer. Impossible.” And again – as if on cue – we passed a stretch of spectators who’d set up posters with inspirational quotes. One from the Matrix was just what I needed to see at that stretch:

“What are you waiting for? You’re faster than this. Don’t think you are, know you are.” – Morpheus

As I passed that sign I read it out loud to myself. I repeated it twice: You’re faster than this, Jess. Don’t think it. KNOW IT. And just like that, my legs felt fresher and I attacked the second half of the race with renewed energy… just as the skies opened up and it began to POUR!

Seriously, those last 7 miles were in basically a downpour. But we motored on! I grabbed an orange slice at one house, thanking the woman and her daughter who were standing in the pouring rain cutting oranges and cheering us on. At what I thought was mile 8 I told myself “5 more miles, not bad!” – then I brushed the rain off my watch and realized it said Mile 9, and I laughed again: I seriously didn’t notice another mile go by!

No one deserves to be this happy at mile 12 of a half marathon in the rain.

I took my second gel, and for the next 3 miles we wound through downtown Long Branch past some shops and headed for the boardwalk. At this point I was deliriously happy. No, really: at mile 11 Shake, Senora came on my iPod and I started singing and run-dancing, getting some WEIRD looks from the folks I passed. #sorrynotsorry I’m feeling better than you, sir!

By the time we got to the boardwalk at mile 12 I was practically bursting – my watch’s average pace of 11:45 meant I was well on my way to beat 2:50. With about a half mile to go, Formation came on my iPod and I floored it. I felt like I’d just started Mile 1, weaving around people left and right, the finish line in sight.

I passed my squad all standing at the sideline in the pouring rain, screaming my name, and waved with a deranged smile as I glanced at my watch just before the finish: I was going to cross at 2:35! 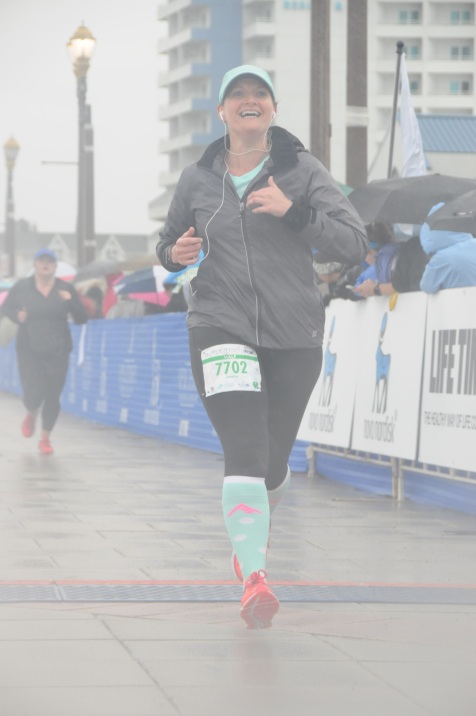 The best part: I ran the second half FASTER than the first!

According to my Garmin the course was long, so my watch time is much better too. But either way, I ran a 15 minute PR in the pouring rain, and I felt like a million bucks.

I met up with everyone past the finish line, crying my eyes out, and had the best hugs and celebration I can ever remember having!

After some thought, I think this race felt so easy for a handful of reasons:

I won’t lie: four days later I’m still flying high on this one. And it didn’t stop on race day: I came in to work Monday to find a tiny little PR cake that my friend had customized with my shiny new finish time in icing!

It’s safe to say this is my new favorite race, and barring any conflicts I will definitely be running this one again next year (hopefully in better conditions)! To everyone who cheered me on virtually here or even out on the course, THANK YOU! Your support has been a huge motivation for me, and I can’t thank you all enough. Even though most of us have never met in real life, knowing that you’re out there rooting for me fuels me to push harder in my training and leave it all on the pavement, and this race was no exception. Cheers to an amazing race – and all the great things I have yet to accomplish thanks to running!