A long time ago, in a galaxy far, far away… I started my Resistance Rey build.

I was excited for this build mainly because it was my “wouldn’t it be nice” cosplay that magically came true by like 85% when Wendy of Chic and Geeks hooked me up with the vest, gauntlets, arm wraps and bag for this costume for an unbeatable price over the summer.

But, as it tends to do, life happened. I commissioned a shirt that took a bit longer than I’d expected (10 weeks, yikes) so I kind of hung around blaming my cosplay laziness on the delayed shirt. WELL. When I learned – with about 2 weeks before NYCC – that the shirt would arrive in time for the con, I went into ConCrunch mode on the pants night after night. Here’s how I modded them!

Thanks to the advice of the lovely ladies in the Rey Cosplay Community on Facebook, I started with a pair of Gloria Vanderbilt Anita Sateen Straight-Leg Pants in Toasted Brown.

I know: they look VERY brown. But trust me. Much like EVERY SINGLE THING REY OWNS, the color changes depending on the light and they’re actually quite greige/olive in some lights.

To start, I put the pants and marked where they should come down to just past my knees, leaving room for the knee slit: 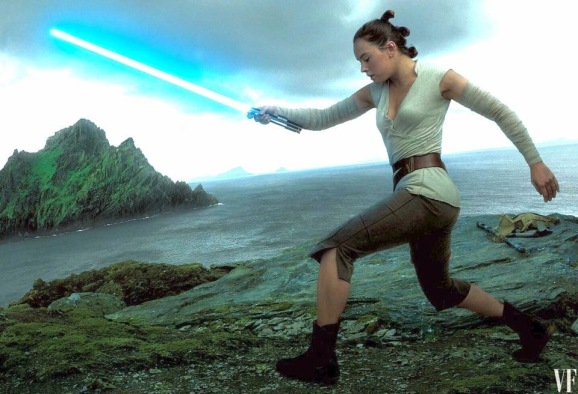 This was the most stressful task, and I put it off way longer than I had to. But cutting those pants was so FINAL! I mean sure, I could go back to Kohls and get a new pair but that wasn’t the point. So I measured like three times and cut even lower than I thought I’d need to, and figured I’d hem them up if I had to.

My plan was to use the leftover leg pieces to create the kneepads that I’d then stuff with batting and sew on separately, last. Of course, I ended up cutting not enough off of the leg and had to remove the seams on the bottom to get an extra inch or two of fabric (as you can see above). 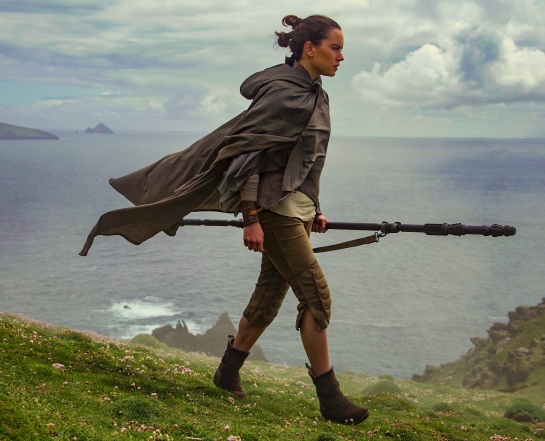 To get the shape of the kneepad, I wish I had a more scientific method but I honestly just obsessed over movie screenshots and photos of the actual costume and eyeballed it against my own leg.

The Rey group on Facebook has a bunch of super great templates and stencils that people who are much smarter than me can scale to the size they need based on their heights and create amazingly accurate, perfectly smooth-seamed kneepads. I, on the other hand, take the Gerald approach: smile with blind confidence because I HAVE A BUCKET. 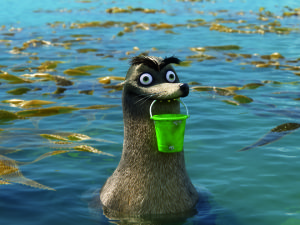 So I took some thicker card stock and traced the outline of the oval-ish knee pads the CRL required, and then did some pencil sketching to figure out what size the blocks should be inside, while also allowing for space between each section. Keep in mind I was going to be hand-stitching all of this because I also don’t own a sewing machine. So… yeah.

Once I had the kneepad templates done, I cut out the 4 kneepad pieces from the remaining pants fabric, ironed them to get the seams out, sewed them together cruddy side in, and left one corner open so I could stuff in a few layers of low-loft batting (look at me throwing actual correct terms around!). Then I stitched up the top and voila: two semi-oval-ish-if-you-squint kneepads. I also cut the templates so that I had the sections ready to hand stitch, too.

Hey, the good thing about Rey’s outfits is that they’re technically all handmade and scavenged, so they don’t have to be Imperial Perfect (TM).

Next came the thigh seam and whipstitching around the hem and knee slit and kneepad making.

Alternatively titled: the week I watched 32 hours of  YouTube videos on “how to pintuck” and “how to whipstitch”. Once I was confident in my ability (and reassured myself a hundred times that IT’S JUST THREAD AND YOU CAN ALWAYS RIP IT OUT AND START AGAIN), I marked off where the thigh seam should lay and pinned it out around both legs, front and back (see the pin job in the pic above). Then I turned on The Great British Bake Off and stitched my heart out for about 10 hours over the next 6 days.

Not pictured: all the blood I shed while doing this work.

Slowly but surely over the evenings, I finished the thigh seam and all of the stitching around the hems and knee slit, and one kneepad.

That’s when I realized that the kneepad looked a little… sad.

Well that’s because I didn’t use enough batting.

What’s a seal with no sewing skills and a lot of ingenuity (and a bucket) to do?

Finish the other kneepad with the same amount of batting, then cut tiny slits in the backs of each section of both pads and SHOVE EXTRA BATTING IN WITH A CHOPSTICK then stitch each hole shut again, and delicately attach each kneepad by hand while The Last Jedi plays in the background and between sobbing breaks every time Leia is on screen.

Full disclosure: I finished the pants AFTER NYCC, and wore my Resistance Rey without the kneepads (see above) to the con, but I finished the kneepads the week after NYCC when I was laid up with the ConCrud (TM), submitted the following weekend, and was approved within a few days.

The only other thing I had to do was tighten up the whipstitching on the undershirt literally eleven hours before we went into Manhattan for NYCC, but hell… what was one shirt’s worth of whipstitching when I’d done endless inches of it on my pants already? I was practically a professional seamstress! 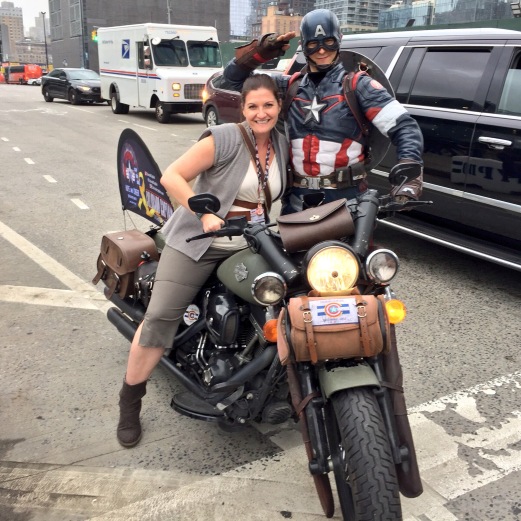 PS: Cap shouted “REY!” when he saw me and made me get on his bike for the pic, so if that doesn’t scream Mission: Accomplished, I don’t know what does.

And that about does it for my Resistance Rey build! In short, it was a build that I mainly commissioned and re-used my Jakku Rey belts and boots and staff for, but making the pants was a super time-consuming and confidence-building part of this costume that I don’t take for granted.

Does this mean I’m about to jump right into the Red Invasion Gown of my dreams? No, no it does not. BUT, it did give me the confidence to believe in myself when it comes to the work I do on these costumes, no matter how small or insignificant it might be in the grand scheme.