Oh my goodness what a long strange month it’s been! Sorry for the lack of updates – its basically been non stop running, training, and racing every day for the last 4 weeks, but let’s take a look back and recap the fun, starting with July 24th, when two friends and I took on the NYC Triathlon in a relay team! Let’s see if I can cram two jam-packed days into one post. Ready? GO!

Announcements had been made earlier in the week that the run course was shortened from 10K to 8K due to the heat, and I could see why when we arrived in the city Saturday morning: it was like a blast furnace outside. After we got to the hotel and checked in, we found Alex & Chris and headed up to the expo for our pre-event briefing and packet pickup. The crowds were stifling – but if you cram 4,000+ people into any place you’re going to run into bottlenecks, I suppose. The layout forced us into very narrow walkways and I got stuck behind a thick crowd of people a few times. Plus the briefing and packet pickup was upstairs and expo/tshirt/swag bag pickup was downstairs. It all made for an uncomfortable expo experience, I won’t sugar coat it. 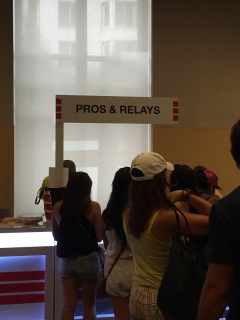 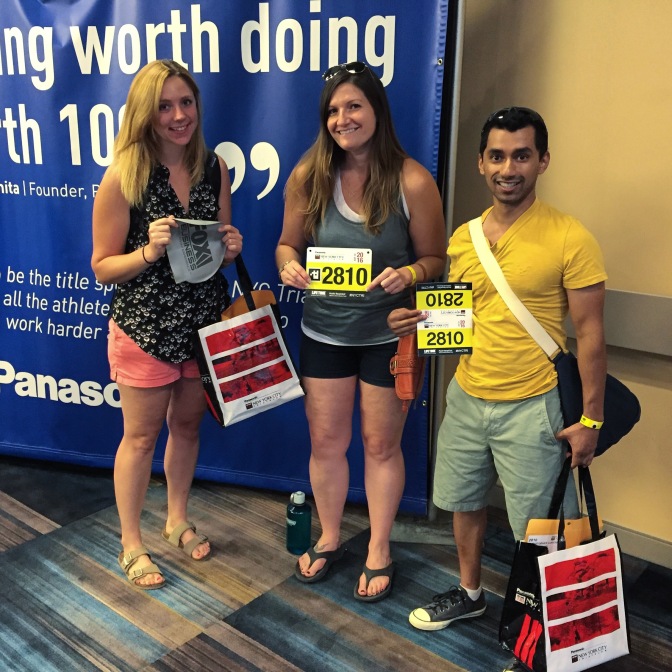 To get it over asap, we sat thru the briefing, got our hands stamped so we could get our packets (at the Pro & Relay check-in table, thanks for lumping us all in together!), asked a few questions of the helpful volunteers there, then walked downstairs to fight thru the expo crowd for our shirts and swag bags, then hoofed it across town to drop off Chris’ bike and check out the transition area. 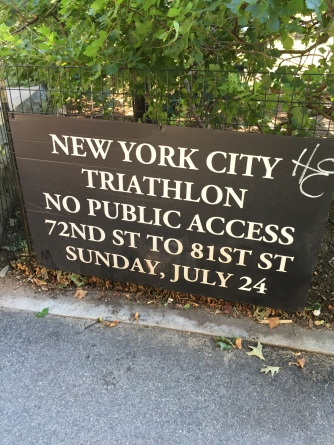 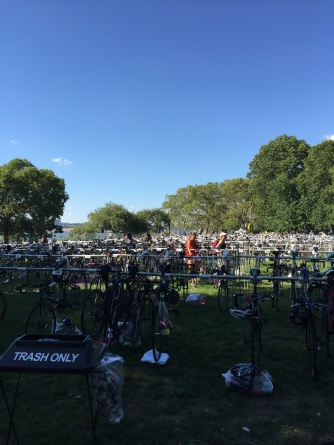 That turned out to be super helpful – just seeing the transition area and the in and out spots helped put our minds at ease. Plus we got a sneak peek at the sarcastic tags they used to mark off our areas: 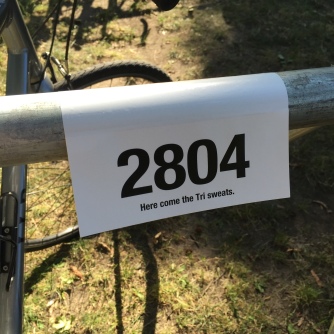 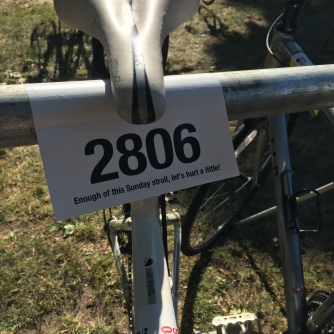 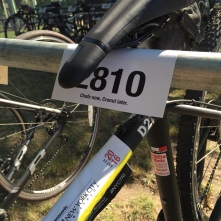 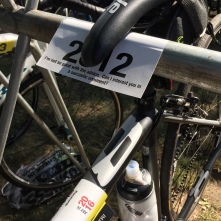 After Chris left his baby on the rack, we ended the day with a quick Uber (my first Uber ride!! I felt so millennial! ) to meet back up with Mike at the Cock & Bull for dinner and drinks.

After parting ways (Chris and Alex stayed at a hotel much closer to the start), Mike and I sat outside for a bit to enjoy the sunset and people watch, then headed back to the hotel to relax and prep for the the next morning. 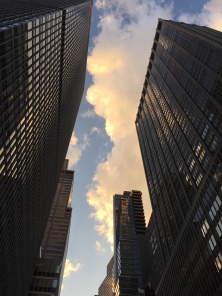 I have to take a moment to shout out the true MVP of the weekend (aside from my husband of course): that little backpack up there. It not only held everything I needed for a night in the city, but it also held Mike’s overnight stuff, ALL my race gear AND my expo swag bag so Mike only had to carry one bag while I raced. Brilliant, right? Round of applause for the little backpack that could. 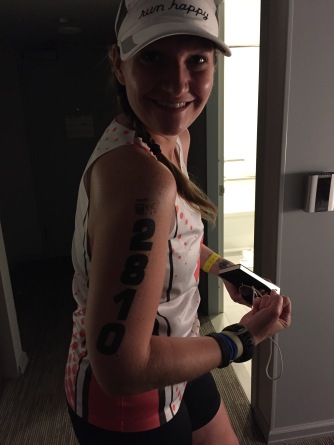 This was the most nerve-wracking part of the whole weekend. I miscalculated how long it would take me to get ready and the leisurely pre-race time I usually have ended up as a frantic 3-minute last check to pack up all my hotel stuff (because Mike was checking out while I ran) and throw my race gear and breakfast into my clear transition bag (and prayed Chris would have room in his bag to carry the stuff I couldn’t run with). After a quick picture to show off my race tats, I sprinted out of the room and made it onto the shuttle bus only to hit every red light.

I arrived at Red Transition at 4:55 when the transition areas closed at 5:15AM – and I still had to go a half mile to Yellow Transition to meet Chris and Alex before Alex left for the mile long walk to the swim start! My heart was pounding by the time I jogged into our area and found them, and we snapped one quick pic before our swimming phenom took off for her start a mile up the Hudson.

Thankfully, it all turned out to be smooth sailing from there on out. As the sun came up, Chris and I BS’d for an hour before the Elite and Pro people started coming in from the swim to the bike. We all cheered and stood in amazement – these folks were incredible!

Shortly after, we started checking the event tracking site to see when Alex jumped into the water – once we refreshed the page and saw she’d been swimming for 3 minutes, Chris gave his now famous announcement: “Shit just got real, son!” and took off for his bike. To keep the already crowded bike rack area clear, I had to wait outside. But I got to hang out with Alex’s towel and be her personal sherpa which was fun.

Chris climbed into his bike shoes, got his helmet on and gave the paparazzi a smile just as Alex made her way in WAY sooner than anticipated (20:03 for a 1.5KM swim, 1:12/100 yds!) and our first transition was underway!

They traded the timing chip, Chris took off on his bike, and Alex met me with a big hug – she crushed it! She was covered in Hudson grit (some people came out entirely covered in gray and black, it was quite gross), but she was psyched and happy with her time. After toweling off and talking for a few minutes, she wished me luck then headed back to their hotel to shower, check out, and meet us at the finish.

At that point it was just me – but it was one of my favorite parts  of the day. As an only child, I really value alone time. And even though I wasn’t really alone but surrounded by 150 other relay triathletes, the hour or so that I got before running was pure bliss.

While I couldn’t race WITH my headphones, bringing them with me to transition for the wait turned out to be a great decision. Having my music helped me get in the zone and calm my nerves while waiting. I leafed through my magazine, ate my fuel (a Starbucks bagel and PB with a tiny bit of banana), hydrated, used the porta potty, and then returned to the steps for pre-race stretching. It also helped that this was my view for the whole hour:

When my timer went off 75 minutes after Chris took off, I started to pack my things away and made one last bathroom stop. He had estimated his time to be around 1:45-2:00, but after seeing some other relay folks start to roll up, I didn’t want to chance not being ready for him in case he was early. It turns out I made the right decision there too: he crushed his time and came in at 1:38: 07 for an average of 15.2mph the whole 40KM!

After he rolled in and racked his bike, he passed the chip along to me and I took off up the hill to 72nd street. After spending the whole morning in the shade by the water with a nice breeze, I was shocked to feel how hot it had gotten. Landing on the cookie sheet heat of 72nd street’s asphalt was a gut punch, but I felt good. Really good, actually, thanks to the unbelievable crowds of people lining the course. There were folks the entire mile from the transition to the entrance to Central Park with signs and cowbells, all cheering and clapping – one guy even yelled out my name after I passed and he saw it on the back of my singlet!

This was my face the whole race, for real!

As I got to the entrance of the park, I spotted Alex yelling my  name, which gave me a nice boost. I cheered right back and gave her a fist pump then glanced at my watch as we entered the park. I was shocked to see I’d already run a mile – in 10:20! It felt like nothing!

At the first water station I slowed to a walk and grabbed two cups – one to drink and one to dump over my head – and continued on my way. It was really cool being surrounded by FULL triathletes as I ran. Being passed by speedy people definitely had something to do with my great pace I’m sure. Mile 2 clicked by at 10:55 with the water stop, and I laughed, amazed at my speed.

Finally, around mile 3.5 I started to flag – there was now no relief from the sun and the hills were brutal. At the next to last water stop, volunteers were handing out baggies of ice and I grabbed one – what a brilliant idea! I alternated between running with the baggie at my neck and throat and wrists, and grabbed a few cubes out to chew on every few minutes too.

A little after mile 4, I was walking up a hill when a guy passed me: “Come on Jess, it’ll be over faster if you run,” he said as he whizzed by. Knowing my teammates and friends and family would be there at the finish, I glanced at my watch – just over 3/4 of a mile left. As good a time as any to drop the hammer, I figured. The crowds grew thicker and I could hear the roar at the finish line, so I downed the last cup of water I’d been carrying and took off.

I pushed through the pain and focused on the people screaming on the sidelines.. My watched ticked to mile 5 and I groaned – the course was long, 8K was under 5! As we rounded the last few tight corners to get to the finish I went into a full out sprint and glanced at the crowds scanning for my people. Unfortunately, I was so overheated and focused on finishing that I didn’t see anyone. BUT that final extended kick managed to get me over the finish line at a freakin fantastic time: 56:29 for 5.22 miles (!) for an average of 10:50 per mile!!! 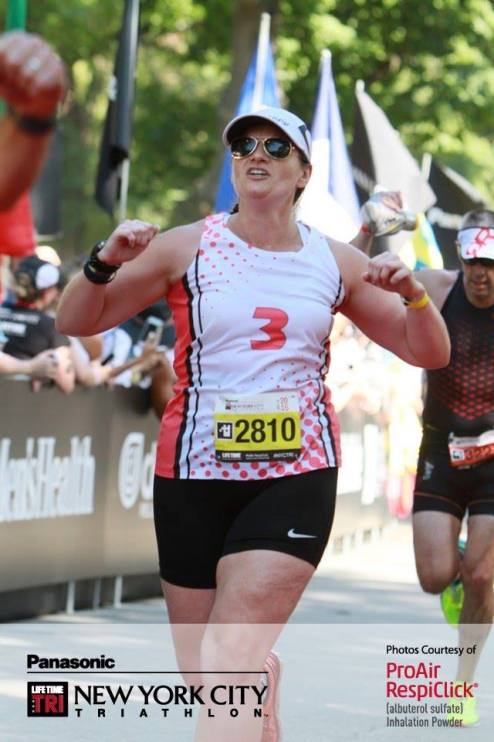 I was so pumped – but also dehydrated and overheated. So I pounded some water, accepted an ice cold wet towel from a volunteer, grabbed the three medals our team earned, turned in my timing chip and headed for the Family Reunion area where I met up with Mike and my friend Lizzie (who had just finished TEN miles that morning for her training run!!) 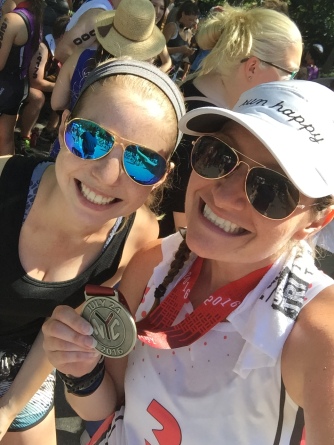 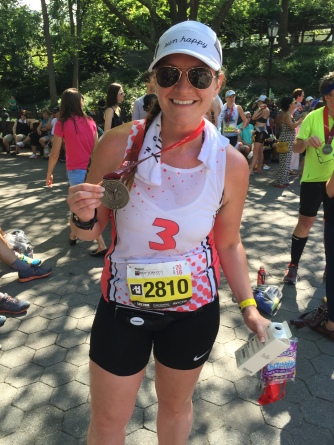 Alex and Chris showed up shortly after with a crew of their friends, and we all hung out to bask in our post-race glow before heading out to celebratory brunch.

Also, I will never forgive you for not putting the shirt on for the picture, Chris. Never.

2,000 words later, I’ll sum it up: this was a great event and we were super happy with our performances. Being fresh for each leg of the event makes a huge difference that I’m grateful for this time around: shortly after we finished they shortened the run to 1.2 miles and had people go right to the finish upon entering the park!

The logistics of it are huge and while the expo/packet pickup situation was a real stress-inducer, it was surprisingly well managed and all the volunteers were super helpful. I’d give it a solid A and would gladly do again as part of a relay team, possibly even on my own!

One thought on “NYC Triathlon Recap”